What is a Non-Controlling Interest?

Despite the NCI not having control of what happens in the company, the NCI still retains all the economic benefits of its holding, in proportion to its ownership.

Examples of when a group might have NCIs is when they have acquired over 50% of the votes (i.e. gained control) of a subsidiary but not bought 100%. Another way to end up with an NCI is to IPO a minority stake in a subsidiary. In the latter example, investors that have bought the shares in the IPO will have economic benefits without control.

Accounting for an NCI

Similarly, in the income statement, all revenues and expenses of all companies in the group will be consolidated to create the group accounts. Therefore, we need to deduct the net income attributable to NCIs in order to arrive at net income to shareholders of the group, the starting point for EPS calculations. 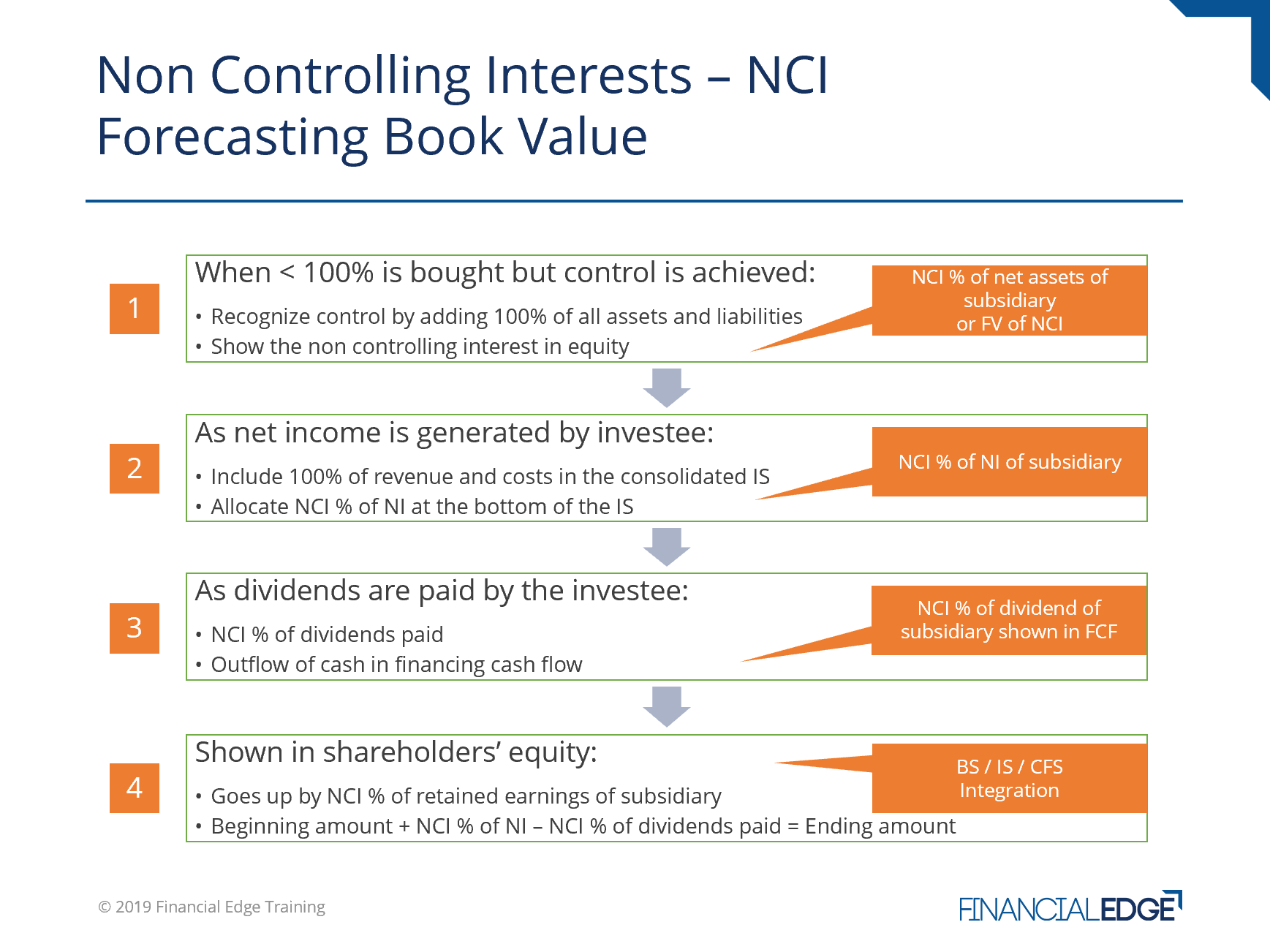 What Number Do We Put on the Balance Sheet?

When an NCI is created as a result of an acquisition, companies have a choice as to what number to recognize in the balance sheet. The first method is to simply recognize the NCI as the percentage of the equity that the majority owner does not own. In technical terms, we recognize the NCI as a percentage of identifiable fair value of net assets. The second method, however, allows us to recognize the NCI at fair value. This fair value is arrived at using stand-alone valuation methodologies such as multiples and DCF and will be in most cases higher than the earlier option. When recognizing this higher fair value, we must also create the associated goodwill on the NCI stake, however, this goodwill is not identified separately in the group’s balance sheet. The latter method, of course, creates a larger asset balance. The valuation methodology used must be disclosed in the notes. Please note that US GAAP only allows fair value accounting for NCI whereas IFRS gives the option.

Once the NCI has been recognized in the balance sheet it moves up and down very logically each accounting period; it increases with the NCI share of net income and it drops down as the subsidiary pays dividends to NCIs. This is analogous to how retained earnings move over time on any balance sheet.

By definition, the NCI does not belong to equity holders of the group. As such it provides funding to the group. The NCI will, therefore, impact our EV to equity value bridge and hence our valuation. Although it might be tempting to use book values for this exercise it should be noted that the NCIs are common equity in operating companies and, therefore, could be valued like any other share (market price if listed, trading multiples or DCF if not). In practice, the size (materiality) of the NCI will govern how much time an analyst will spend valuing it!

When a company in a group pays a dividend, it must pay all shareholders in proportion to their holdings in the company. This means that if the parent company in a group wants to move cash from a group company that has NCIs, it will have to pay dividends out to NCI shareholders, effectively causing cash to leave the group. This “cash leakage” is one reason why in an LBO the buyer generally buys 100% of the shares, to avoid the creation of an NCI.

Be aware that if you see an NCI described as redeemable, it means that the group has written put options to NCI shareholders giving NCIs the right to sell their shares to the group at a pre-determined price. If the NCIs exercise this put option, it will lead to a cash outflow from the group which could be significant!