What is the “Dow Jones Industrial Average (Dow)”?

The Dow Jones Industrial Average (DJIA), commonly referred to as “the Dow” or “the Dow 30”, is a stock index that aggregates statistical values formed by 30 large-cap, publicly listed companies that are actively traded on the New York Stock Exchange or Nasdaq. The 30 companies are considered industry leaders which provide a benchmark for U.S. blue-chip stocks. Investors see DJIA performance as the indicator of the strength or weakness of the overall stock market. The DJIA is unique because it is a price-weighted index. The other major indices in the US are calculated using the market capitalization of the composite companies.

Founded by Dow & Jones Company founder Charles Dow in 1896, with only 12 companies primarily in the industrial sector, including the railroads, cotton, gas, sugar, and oil. As the US economy evolved over time, the DJIA components changed accordingly.

Components of the DOW

The DJIA is currently composed of 30 companies across sectors such as technology, financial services, retail, and health, etc. The DJIA is commonly used to do the following:

Below is a chart of Dow component companies by industry: 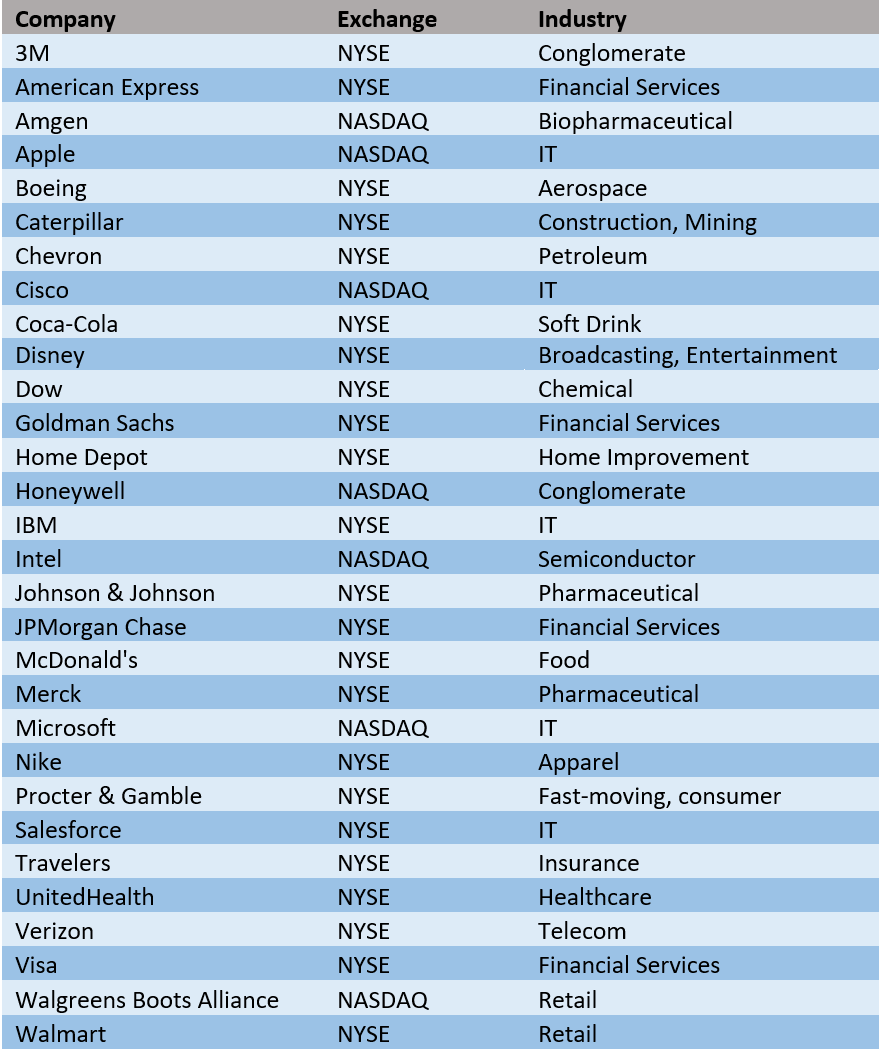 How is the Dow Jones calculated?

The value of the Dow Jones Industrial Average is calculated by determining the average value of the stock prices of the 30 listed companies. This means that stocks with higher share prices carry higher weight in the index. Certain structure or transactional changes such as mergers, spinoffs, stock splits further complicated the calculation of the Dow 30’s value. Therefore, calculating the average value is not as simple as totaling the 30 stock prices and dividing by 30. Instead, the Dow 30 value is calculated by totaling the 30 stock prices and dividing by a divisor which takes into account certain structural changes such as stock splits, mergers, or dividends which also makes the Dow a scaled average. The latest Dow 30 divisor is 0.15172752595384.

The value of Dow is calculated using the following formula:

There are many other stock indices that are used to quantify broad market performance, such as S&P 500, NYSE Composite, FSTE100 et al. Among these major indices, the Dow is one of the most used. It represents companies at the heart of the US economy. The Dow today has a well-distributed allocation of industries and is a great snapshot of market performance. However, there are drawbacks to the Dow. One of the drawbacks is that it is no longer a good indicator of the US economic health as most of its component companies have a global presence and their success may not solely depend on the U.S domestic economy. Another problem with the Dow is related to its calculation method, the DJIA is price-weighted, rather than market-cap-weighted which is considered a better representation of companies’ impact on an index. For this reason, the Dow Jones should not be seen as analogous to the FTSE100 or S&P 500 which are both pure stock market index trackers and do not employ price-weighting.