What is “Shareholder Activism”?

Shareholder activism, also known as active ownership, is an approach in which an individual or most commonly an institution can use its stake in a company to influence a corporation’s behavior. With the rising focus on Environmental, Social, and Governance (ESG) issues, shareholder activism has increased significantly over recent years.

Although minority shareholders do not have hands-on experience in running the day-to-day business of the company, being active shareholders by writing proposals to the senior management, voting, and taking part in annual general meetings are just a few of the tools they have at their disposal that can trigger the desired change of direction.

Institutional investors are one of the most common types of shareholder activists. They are usually a pension fund, mutual fund, or insurance company, and have long-term interest in the company in question. They could hold a large share of the business and therefore a higher level of influence over the management. Hedge funds and even individual investors could also use their rights and try to initiate change.

Voting campaigns are often employed by institutional investors and are an efficient way to influence the management of the business. In essence, this approach encourages other shareholders to withhold votes or vote against certain proposals by the board of a company. For example, shareholders might not be happy with excessive executive pay and could vote against it. Even if not successful, this sends a clear message to the management that shareholders are not happy and could potentially even divest from the company.

Proxy contests are an aggressive approach of shareholder activism in which shareholders could attempt to replace the company’s board members in order to trigger an internal change. This type is often employed by hedge funds and is typically settled with an agreement in which the company gives up a seat on the board. These are also known as “proxy fights” and can be very costly for the business.

As individual investors have more restricted access to the company’s management and usually their vote is not as significant as the vote of institutions, they will often need to join forces in order to succeed. However, they can still benefit from the changes that institutions trigger within the organization and it is essential to remain informed on the recent events involving all stakeholders. 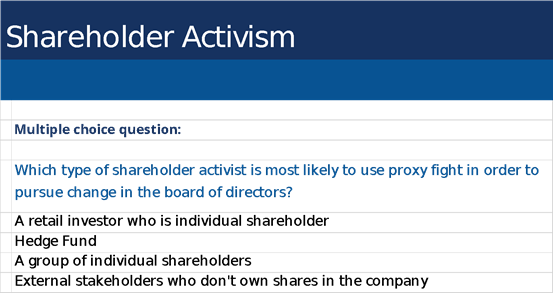