What are “Delayed Draw Term Loans”?

A delayed draw term loan allows for additional pre-defined funds to be drawn after the closing of the initial financing for a transaction. They are technically part of an underlying loan, in most cases, a first lien B term loan; however, they can also be attached to unitranche financing. The primary purpose for DDTLs is to fund additional acquisitions (add-ons or tuck-ins) after a platform transaction.

Generally, in private equity, higher multiples are typically paid for larger companies due to the perceived risk involved with smaller companies. Acquiring size is costly and allowing time for growth can hinder returns with longer hold periods. One alternative is to acquire several smaller companies at lower multiples to integrate and achieve growth. Often before an initial or “platform” acquisition is made, the sponsor will already have considered or planned the follow-on acquisitions, also referred to as tuck-ins. To efficiently finance those acquisitions, sponsors will seek delayed draw term loans in conjunction with the financing for the platform acquisition. This gives the borrower access to cash without arranging an entirely new facility.

The Cost of Bespoke Finance

DDTLs provide enhanced flexibility for longer-term capital. Like revolvers, they have commitment fees (around 1%) and in addition, they carry ticking fees, which charge the borrower additional points the longer the commitment is outstanding and unused. There is also generally a 30 to 60 day holiday after the underlying closes on which no fee is charged. Below is an example of how the commitment and ticking fees would add to a loan’s cost over time, assuming the DDTL is unused for the entire commitment period. 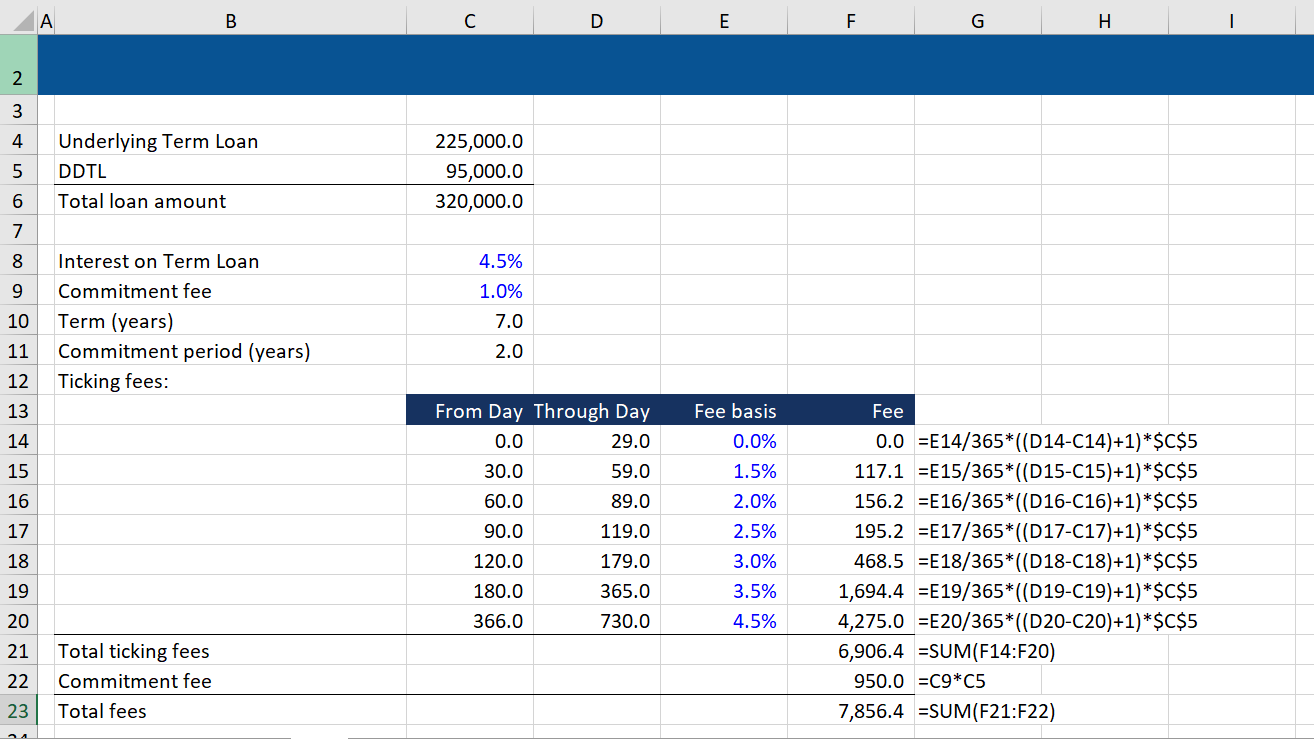 Originally, DDTLs were used for a specific transaction identified by a sponsor and expected to occur within a few months of the platform deal. Over time, these loans have become more sophisticated with a range of approved purposes including specified and non-specified deals as well as CAPEX and debt repayment. The commitment lengths have also grown up to two years’ time.

DDTLs vs Revolvers and Accordions

Unlike revolvers, DDTLs are considered long-term capital. While revolver terms are typically five years, they are intended for short-term capital needs like working capital and not acquisitions.  Revolving credit facilities can be drawn, paid back, and then drawn again. Once a DDTL is repaid, the funds are no longer available for use. A similar financing arrangement is an accordion loan, which is excess loan capacity provided by a bank to a borrower with growth prospects. They are typically tied to metrics such as sales or earnings and designed to expand as the company expands. DDTLs, on the other hand, are incremental loans provided specifically for the purpose of making growth happen.

Delayed draw term loans are a flexible way for borrowers, usually with the backing of sponsors, to finance incremental acquisitions after a significant transaction. The loans come with a host of fees and some restrictions but often are an appealing way to finance growth through acquisition in the middle markets.