What is “Discretionary Cash Flow”?

The use of discretionary cash flow is decided by the management and can be available for dividend payouts, paying down debt, or for other uses. It is a useful measure of a company’s financial performance as it shows how much cash a company is generating above its ongoing obligations. Investors like to consider investing in companies with a strong (positive) DCF and it is a key metric to assess the cash flow adequacy of a company.

One can obtain the discretionary cash flow of a company by the following formula:

To summarize this formula, DCF is cash generated by the core operations of a company, less capital expenditure, and fewer dividends. S&P defines DCF as free operating cash flows with fewer dividends paid. It is called Free Cash Flow by Fitch Ratings.

The DCF is derived from a company’s financial statements and can impact its valuation.  It can assist in determining its fair price (for the buyer of a company) and asking price (for sellers).

Analysis of the DCF of a company, enables a lender/bank to know exactly how much cash is available in a company to repay debt. To calculate the debt capacity of a company, lenders/banks/credit analysts will usually compute a company’s DCF. If a company generates a healthy DCF then it would suggest that it should have the capacity to repay additional debt in the future.

Discretionary cash can be used in several valuation processes. It is used in discounted cash flow analysis to value a company or to know what it might be worth, based on the NPV of its cash flows in the future. It is also used in a Leveraged Buyout analysis or model, in order to determine how much debt a company can pay each year.

In order to compare the performance of companies (either across a sector or by geography), analysts can assess their discretionary cash flows. It is useful to analyze whether the DCF is growing or declining each year and at what rate. Analysts will want to know what is driving the increase or decrease in the same – it might be the way the company is run, the stage of the business cycle, or something else which might be specific to the company (or the marketplace).

How DCF is distributed is the responsibility of management. This in turn will impact the business performance, growth prospects, and valuation. For example, if a company generates a relatively high DCF (i.e. strong positive DCF), which is growing at a reasonable or good rate each year, it may need to decide what to spend it on. This might be capital expenditures (perhaps an expansion project or upgrade) to boost long-term growth prospects. Or it could be repaying outstanding debt which would be a priority if the debt costs were considered expensive. Other uses of DCF include spending more on working capital, buying back shares, issuing dividends, or acquiring companies.

Given below is an example where a company’s DCF is negative, indicating that it earned less than it spent on a periodic basis. If a negative cash flow (DCF) is a trend, it could suggest that the company may be experiencing financial difficulties and it might need to raise debt (or equity) to cover its ongoing spending.

Presented below is the cash flow statement of a company. 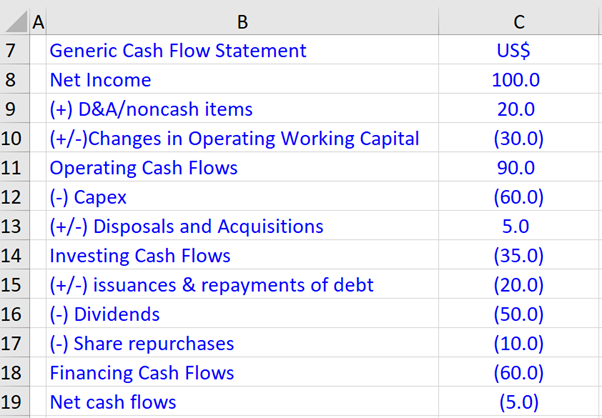 In summary, discretionary cash flow is a useful metric to see how robust a company’s cash flow generation is relative to its ongoing spending. Companies consistently generating a strong discretionary cash flow would have numerous options to spend this cash: it could be on expanding the business operations, improving the debt ratio, or returning cash to shareholders.

If a company does not generate a positive discretionary cash flow it suggests that the company is spending more on its operations than it is generating. This can be managed in the short term, but management will need to take decisive action if it continues as it erodes the company valuation and may lead to operational issues if it can’t afford to pay for ongoing obligations.