What is an “Intercreditor Agreement”?

An intercreditor agreement, or ICA, is a contractual and legally enforceable contract between the various lenders within the same capital structure.  As there are often different creditors in a single capital structure, the lenders need to agree on the key issues of collateral, payment, lien subordination, debt caps, and remedies if the debtor defaults or seeks bankruptcy protections.

The most common forms of ICA are first lien/second lien and senior/junior.  First and second lien lenders have a claim on the same collateral.  The ICA establishes that in case of liquidation, the first lien lender will have a priority claim on the proceeds from the collateral liquidation.  The ICA will also outline the process if the two lenders stand pari passu, or on equal footing, regarding their senior payment status.  This means that cash payments to satisfy interest and principal payments must be made to both lenders as they both have first priority status with regards to payment.

If there is a junior lender in the capital structure, additional considerations are necessary, and typically another ICA must be implemented.  The junior lender, sometimes bondholders but more often mezzanine, is not secured by collateral and will most likely not receive any proceeds from the liquidation of assets.  The repayment of mezzanine debt and the annual payment of interest is also subordinated to the payment of debt obligations to the senior lenders.  The senior lenders can legally stop or pause payment of interest to the junior debt holders if the loans are in default.  Additional details must be worked out regarding any missed interest payment – i.e., whether or not this new obligation of interest in arrears becomes senior in status like the senior loans.  Therefore, junior lenders will seek caps on additional indebtedness so as not to be further crammed down in the capital structure.  Junior debt holders will often want some say in whether the first and second lien lenders can force liquidation of collateral as that almost always guarantees junior debt holders will be shut out of the recovery.

Unitranche facilities appear to resolve the issue of multiple classes of lenders by having a single tranche of debt. However, a unitranche facility still has several investor groups with positions that mimic the classic structures of first lien/second lien and senior/junior.  There can also be a revolver within the unitranche or separate to the facility.  When these investors are all within one unitranche facility, there is often an agreement among lenders or AAL.

It is worth noting that ICAs have been tested many times over in bankruptcy court, and the parties are generally quite familiar with each other and the terms.  AALs have not yet been tested in bankruptcy proceedings, making familiarity among the parties the most crucial element.  In the few cases where AALs have been tested in US courts, the court has refused to rule and instead asked the parties to work out a settlement.  In the event that a revolver is being provided by a bank apart from a unitranche facility, an ICA is needed once again.

Intercreditor agreements, or ICAs, are critical legal documents that are necessary when there is more than one lender in a capital structure.  When debtors default or seek bankruptcy protection, the ICAs become extremely important in determining how the lenders can continue collecting interest owed, recovering past payments, and receiving cash consideration from collateral liquidations.

Below is a multiple-choice question to test your knowledge. Download the accompanying excel exercise sheet for a full explanation of the correct answer. 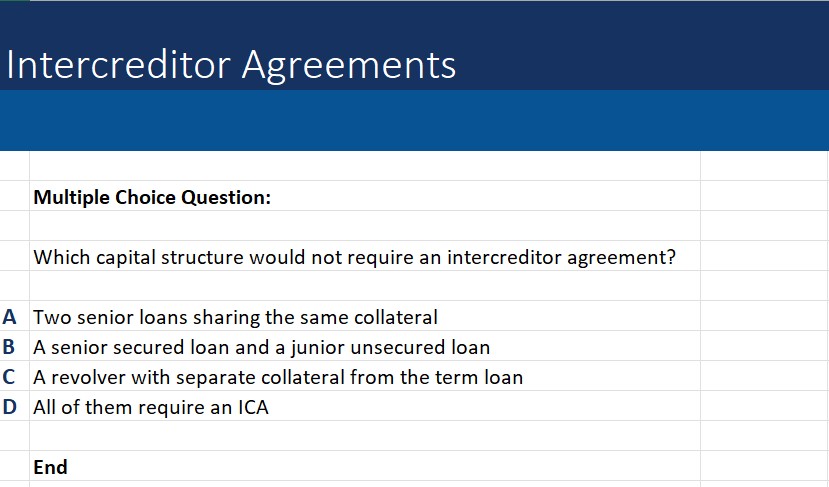