What is a Letter of Credit?

A Letter of Credit (LC) is essentially a document from a bank guaranteeing that a buyer’s payment to a seller will be received on time, for the correct amount and in the correct currency. In the event that the buyer is unable to make a payment on the purchase, the bank will be required to cover the full or remaining amount of the purchase. An LC is a payment term typically used for long-distance and international commercial transactions and is a key instrument used by importers, exporters, and banks in Trade Finance. It is a way of reducing the payment risks associated with moving goods globally. Using documentary letters of credit allows the seller to significantly reduce the risk of non-payment for delivered goods.

Parties Involved in an LC Transaction

When the seller has doubts about the credit-worthiness of the buyer or wants to ensure prompt payment, the seller can insist on payment by an irrevocable Letter of Credit. If the bank issuing the LC is unknown to the seller or if the seller is uncertain about a foreign issuing banks ability to honor its obligation, the seller can, with the approval of the issuing bank, request its own bank or a large international bank, to assume the risk of the issuing bank by confirming the letter of credit. Banks typically require a pledge of securities or cash as collateral for issuing a letter of credit, as well as collecting a fee for the service, typically a percentage of the amount covered by the LC. The International Chamber of Commerce Uniform Customs and Practice for Documentary Credits oversees letters of credit used in international transactions.

Below is a table with the key terms typically used in arranging a letter of credit.

The Applicant, the importer, needs the Letter of Credit in order to buy the goods. The Beneficiary, i.e. the exporter, sells the goods. The issuing or opening bank acts as the importer’s bank and issues the LC. The advising bank advises the seller on the LC. The confirming bank, often a 3rd party bank but sometimes also called advising bank typically confirms the LC. Depending on the situation the issuing bank, the advising bank or the confirming bank may pay the LC.

A commercial letter of credit is a direct payment method in which the issuing bank makes the payments to the beneficiary. It is the most simple of the various types of letters of credit.

Confirmed vs. Unconfirmed Letter of Credit

The confirmed letter of credit refers to an additional guarantee to the original letter of credit obtained by a borrower from a second bank. This second letter guarantees that the second bank will pay the seller if the first bank fails to do so. The issuing bank in international transactions typically requests this arrangement.

Irrevocable vs. Revocable Letter of Credit 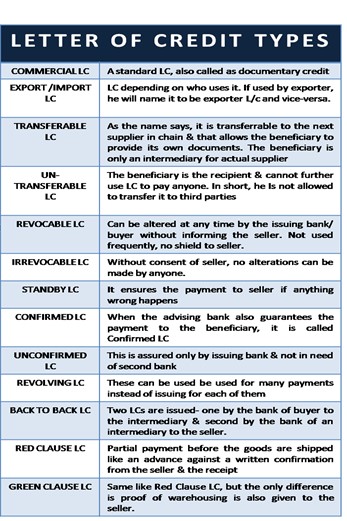