There are two ways to subordinate tranches of debt so that one tranche takes priority over the other. The first is called lien subordination, in which two forms of senior, equally ranked debt share the same collateral, but one is given priority over that collateral in case of liquidation. The second is called payment subordination, in which one tranche of debt receives interest payments or principal ahead of a more junior tranche in the case of default or liquidation.

An Example of Lien Subordination

In a typical leveraged capital structure, there will often be several tranches of debt, including a revolver, term loans, high yield bonds, and mezzanine financing. The structure can often be divided between senior debt (the revolver, term loans, and sometimes bonds) and junior debt (often the bonds and the mezzanine). Senior debt is generally secured by the assets of the company. With several tranches of senior debt, there are often competing claims on the assets. One way around this is to split the collateral between the lenders. Revolver lenders will often require their own pool of collateral that includes the working assets of the company (accounts receivable and inventory).  However, in many cases, the term loan lenders will share a pool of collateral while one lender will require a first lien or claim on the assets. The other term loan will have a second lien or residual interest.  The following chart depicts the payout order for a first lien/second lien in the event of liquidation. 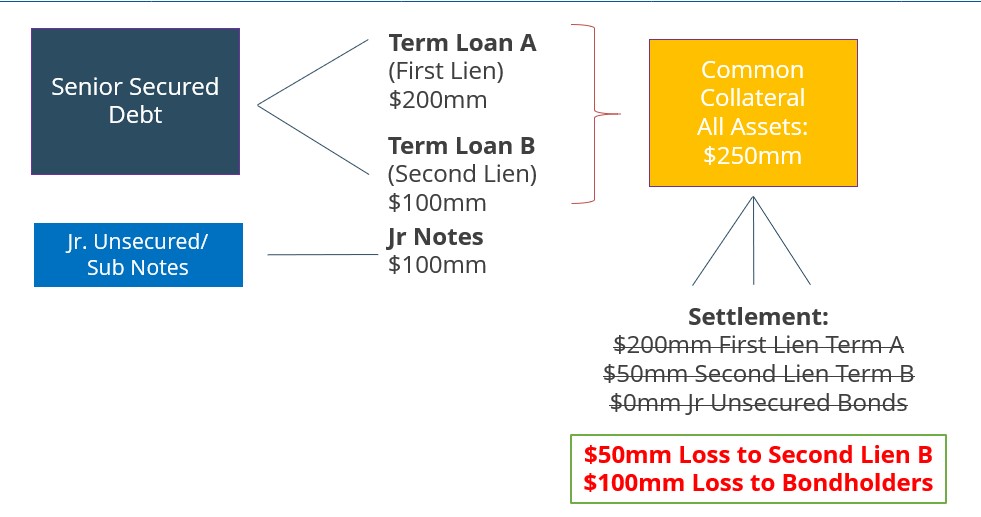 It is important to note that the first lien/second lien structure does not imply that the second lien is subordinate in terms of debt service. When an issuer goes into default, there is often a standstill period during which the lenders will attempt to work with the borrower to resolve the situation.  The payments to all senior lenders will continue contractually during this period while payments to junior lenders may be paused.

An Example of Payment Subordination

Picking up from the example above, in a situation where there is a standstill to work out a resolution, subordinated lenders may have their payments interrupted.  This group of lenders can include the bondholders (if they are junior/subordinated as opposed to senior unsecured) and almost always includes a mezzanine. There are typically provisions in the ICA that prevent this from happening too often or for too long a period.

Lien subordination refers to the order in which claims on collateral are prioritized. This takes place most often among senior secured lenders and does not imply that one tranche of senior debt has payment preference over another. Payment subordination occurs when one tranche of debt is referred to as senior and another junior. This does imply that there is a payment preference of interest and principal in favor of the senior debt in the case of liquidation.