What are “Porter’s Five Forces”?

Porter’s Five Forces is a business strategy framework that identifies and explains the key factors that influence competition in an industry. According to the model, the competitive landscape of an industry is shaped by five fundamental forces. These five forces, first identified by Michael E. Porter in an academic article published in 1979, play a vital role in shaping and explaining the long-term profit potential of an industry. According to Michael E. Porter, the five forces which highlight an industry’s profit potential, competitive framework, and overall attractiveness are:

Porter’s model is important because a solid understanding of the competitive landscape is essential when formulating a corporate strategy.

Porter’s Five Forces is one of the most highly regarded business strategy tools. The model is used to analyze an industry’s attractiveness and potential profitability.

A corporate strategist’s goal when employing this business model is to gain a competitive advantage for their company over others. A deep understanding of the sources of competitive pressure highlights the critical strengths and weaknesses of the company and determines its position in the industry. It also identifies the areas where strategic changes may yield the greatest payoff and highlights the areas where industry trends promise to hold the greatest significance as either opportunities or threats.

Competitive rivalry examines the number and strength of a company’s existing competitors. Rivalry can take on several forms, including price discounting, new product introductions, advertising campaigns, and service improvements. Porter suggested that rivalry can be incredibly destructive to profitability if it leans heavily towards price alone.

In an industry where rivalry is intense, companies attract customers by aggressively cutting prices and launching high-impact marketing campaigns. Suppliers and buyers will seek out a company’s competition if they can offer a better deal or lower prices.

On the other hand, when competitive rivalry is low, a company has greater power and freedom to charge higher prices and set the terms of deals to achieve higher sales and profits. This gives the company tremendous competitor power as well as healthy profits.

The competitive rivalry in an industry becomes more intense based on the number of competitors, industry growth, and the barriers to entry and exit.

The introduction of new entrants into its market or industry significantly impacts an existing company’s power. New entrants to an industry bring new capacity, the desire to gain market share, and often substantial resources. The threat posed by new entrants depends on the barriers present and the reaction from existing competitors that entrants can expect.

These barriers to entry can be in the form of economies of scale, product differentiation, capital requirements, cost disadvantages, access to distribution channels, and government policy. Where such barriers are high, the threat of entry is low. If barriers to entry are high and newcomers can expect sharp retaliation from the existing competitors, then new entrants do not present any significant threat.

Alternatively, the less time and money it costs a competitor to enter a company’s market and become an effective competitor, the more likely it is that the existing company’s position will become weakened. In other words, the fewer the barriers to entry, the greater the threat posed by new entrants. Additionally, if new entrants do not face any pushback from existing companies, such as price cuts to maintain market share and industry growth is on the rise, the threat of entry is significantly amplified.

Supplier bargaining power is determined by how easy it is for a company’s suppliers to increase the cost of inputs or reduce the quality of purchased goods and services. Powerful suppliers can squeeze profitability out of an industry. This is affected by the number of suppliers of critical inputs of a good or service, the uniqueness of these inputs and the switching costs involved.

The bargaining power of suppliers is intensified where the supplier group is dominated by a few companies and is more concentrated than the industry it sells to, the product is unique or at least differentiated, and there are high switching costs in addition, where there is a threat of forward vertical integration and if the industry is not an important customer of the supplier group. All these factors significantly increase supplier bargaining power.

Supplier bargaining power is low in the scenario where there are several suppliers with undifferentiated products and low switching costs. Suppliers will not significantly influence the cost of inputs because a company will quickly switch to another supplier offering better and more favorable terms and enhancing its profits.

Buyer bargaining power is greater where the buyer group is concentrated, poses a significant threat of backward integration, and where the products purchased are standardized. In addition, if the products form a substantial fraction of the buyers’ costs, buyers are likely to negotiate favorable terms elsewhere and purchase selectively. A smaller and more concentrated customer base translates into greater bargaining power and is highly price sensitive.

The last of Porter’s five forces focuses on substitutes – substitute products or services limit the potential of an industry. Companies that produce goods with close substitutes face the genuine possibility of losing a share of their client base and an erosion of their profitability. Unless they can improve the quality of the product or implement differentiation strategies, the industry will have limited earnings and growth potential.

Companies offering products with no close substitutes can conveniently increase prices and profits.

Business strategists should pay close attention to substitutes subject to trends, improving their price-performance tradeoff with the industry’s product and those produced by industries earning high profits. Substitutes usually emerge if some development increases competition in their industries and causes price reduction or performance improvement.

The primary purpose of this model is to evaluate the root causes of profitability in industry through the competitive forces. Porter’s Five Forces can help corporate strategists to analyze the attractiveness of a particular industry, assess investment options, and measure the level of competition. Understanding all five forces provides a company with the necessary information to formulate a business strategy that will offer it a competitive advantage in the industry and enhance profitability and earnings for its investors.

Below is a multiple-choice question to test your knowledge. Download the excel exercise sheet attached to find a full explanation of the correct answer. 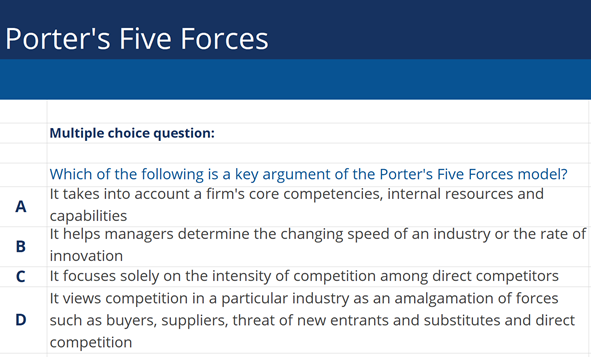