What is a “Business Cycle”?

Business cycles are the natural expansion and contraction of economic growth over a period of time. Typically, the current point in the cycle is determined by the inflation-adjusted (i.e. real) Gross Domestic Product (or GDP), but other factors such as industrial production, inflation, interest rates, unemployment and consumer spending could also be used in the assessment.

The business cycle, also known as economic cycle, consists of four stages – expansion, peak, recession and depression. There are no rules for how long a cycle should last – in fact it could take many years before an economy overheats and starts to contract, but that is however necessary even for a healthy economies.

Understanding the Four Stages of a Business Cycle

There are economic and business implications that differentiate the four stages of a business cycle. During an expansion, the economy is growing and so do the industrial and services output. Companies generate strong profits and hire additional resource, as a result of which unemployment naturally decreases. Disposable income levels are high, which in turn leads to higher consumer spending.

Economic peak is the second stage of the cycle and this is when the economy starts to overheat on the back of strong economic growth and rising inflation. It is usually during peak periods when investors make some irrational decisions as a result of which asset bubbles are created.

During periods of economic contraction (or recession), corporate earnings decline and businesses need to cut costs. Typically, this is when companies reduce their headcount as a result of which disposable income declines and so do the levels of consumer spending.

The fourth stage is depression and works as a transition from recession to expansion. It is characterized with sharp decline in economic activity and high levels of unemployment. Access to capital is restricted and default risk is high. During depression consumer spending is at its lowest point and savings rates are high. 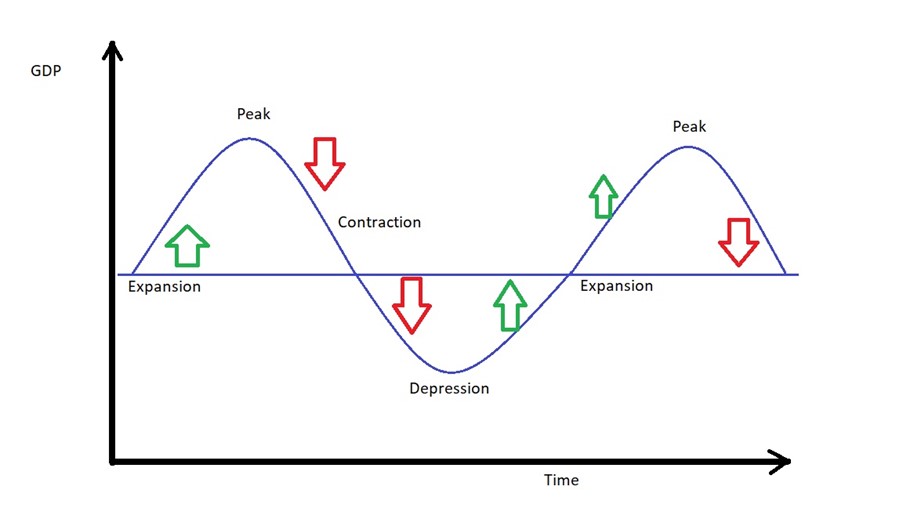 Central Banks, governments and major financial institutions try to navigate the cycle through the use of various mechanisms and tool. For example, governments employ different fiscal policies, most notably expansionary to end a recession and contractionary to prevent the economy from overheating.

Central banks use monetary policy through the management of interest rates – cutting rates usually boosts spending and investment, while rising rates reduces inflationary pressures. In terms of sectors, during expansionary period investors tend to favor economically sensitive sectors such as energy and technology, while in recessions the focus is usually shifted towards more defensive businesses such as healthcare and utilities.