What are “Exchange Rates”?

Exchange rates are the value of one nation’s currency versus the currency of another nation or economic zone. The rate can tell you how much a currency is worth relative to others. Essentially, exchange rates illustrate the value of your currency in a foreign currency or the price point you are charged to purchase that currency. Foreign exchange traders decide the exchange rate for most currencies based on supply and demand. The economic and social outlook of a country will influence its currency exchange rate compared to other countries.

A free-floating exchange rate rises and falls on a moment-by-moment basis due to changes in the foreign exchange market (forex market).

Sometimes a country will peg its currency to that of another nation. This means that the values of the currencies will remain within a specific exchange rate range. The Saudi Arabian riyal has been pegged to the dollar to help keep the currency stable during an oil crisis.

A private equity company raised CHF2 billion in 2003 and invested the funds into a UK company on 5th November 2003. It paid GBP800 million for the company and exited the investment on 17th March 2014 for GBP1.3 billion. Please compare the multiple on Invested Capital (MOIC), also known as the money multiple (MM) in GBP and CHF: 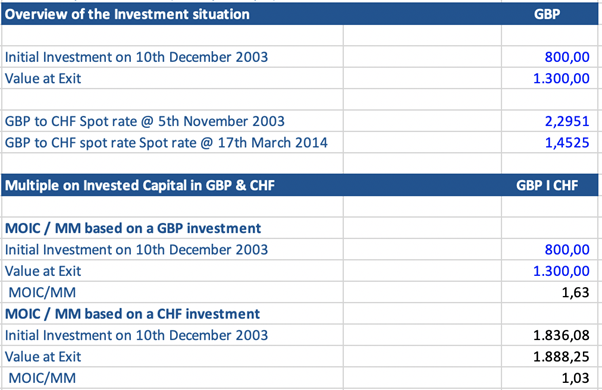 Exchange rates can be affected by a multitude of things, the three best-known factors being interest rates, money supply, and financial stability. Due to the drivers of these factors, the demand for a country’s currency can depend on the macro, political and economic events happening in that particular country (and others).

The interest rate paid by a country’s central bank is a key variable for exchange rates. As a simple rule, the higher the interest rate, the more valuable the currency will be. Investors will exchange a held currency for one paying a higher rate of interest. Monies can then be put into savings in that country’s bank and receive the higher interest rate.

On top of that, the money supply, which is created by the country’s central bank, influences exchange rates. If the government prints too much currency, then there’s too much of it chasing too few goods. Currency holders will bid up the prices of goods and services. That creates inflation, which makes the value of the currency sink.

Lastly, a country’s economic growth and financial stability can impact its currency exchange rates. If the country has a strong, growing economy, then investors will buy its goods and services.