What are “International Bond Markets”?

An international bond is defined as a bond issued in a country that is not the domestic country of the issuer. Such bonds can be classified into three broad types – eurobonds, foreign bonds, and global bonds. International bonds are exposed to inflation, interest rate, default, downgrade, currency and liquidity risks, plus market volatility.

Eurobonds account for approximately 30% of the global bond market. Such bonds can be issued with fixed or floating interest rates. These bonds typically have medium to long term maturities. The issuer can choose between a significant range of maturities – usually 3, 5, 7, and 10 years – although some eurobonds have maturities ranging from 15 to 30 years. Eurobonds denominated in dollars (known as Eurodollars) are the largest component of the Eurobond market.

Investing in the international bond markets can help investors to diversify their portfolio, gain exposure to foreign markets, get high returns (in return for higher risk, relative to domestic bonds), and can be useful for hedging. However such bonds can add exposure to the additional risk of currency fluctuations (i.e. exchange rate risk), country risk and their liquidity is often low when compared to domestic bonds. Further, the transaction costs of international bonds tend to be higher relative to domestic bonds.

Example: Currency Depreciation of the US Dollar (Foreign Currency)

Assume that a UK based investor purchases a one-year US dollar denominated bond with a $12,000 par value. It is trading at par, has a one year maturity and coupon of 3% (annual). At the time of purchase, the exchange rate was $1=£1.7. Consequently, this investor paid £20,400 for the US$ denominated bond. By the time the bond matured, the USD depreciated against the GBP i.e $1=£1.4. 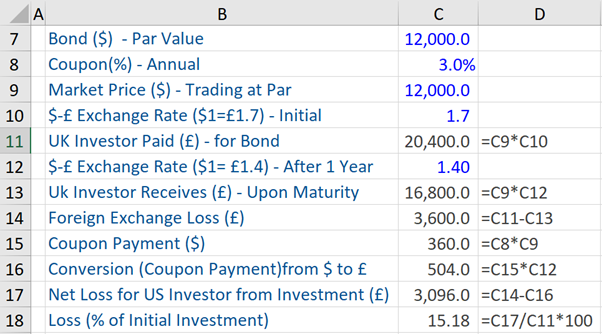