The London Interbank Offer Rate (or LIBOR) is the globally accepted benchmark interest rate used by major global banks to charge other banks for short-term loans with up to one year of maturity. It is calculated on a daily basis and released by the Intercontinental Exchange (ICE). LIBOR is widely used by financial institutions and has an impact on the pricing of instruments such as derivatives, syndicated loans, and collateralized debt obligations (CDOs). There have been a lot of controversies around its objectivity and methodology, which resulted in the decision to gradually replace LIBOR with the new Secured Overnight Financing Rate (SOFR).

How Does LIBOR Work?

Currently, LIBOR is calculated in five different currencies (USD, GBP, EUR, CHF, and JPY) and for seven maturities in respect of each currency (Overnight/Spot Next, One Week, One Month, Two Months, Three Months, Six Months and Twelve Months). That results in the release of 35 individual rates (one for each currency and maturity combination) every London business day.

The calculation methodology is based on data contributed by a panel of between 11 and 16 Contributor Banks, which report the rates for each of the five currencies and for all seven maturities. The approach used to calculate the rates is known as “trimmed mean”, which eliminates a percentage of the smallest and largest values before calculating the mean. As a result, quotes in the highest and lowest 25% (technically known as quartiles) are eliminated and the average of the remaining quotes is calculated and rounded to five decimal places. 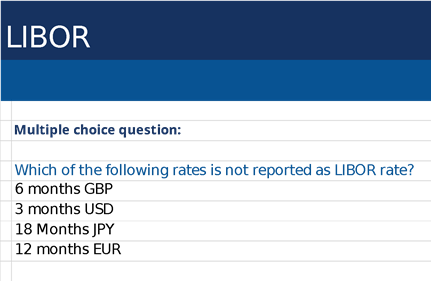 There have been multiple scandals that revealed the manipulation of LIBOR by major banks reporting lower than actual LIBOR rates. This included one in 2012 that led to Barclays being fined US$450m and the resignation of its CEO. In 2017, the Financial Conduct Authority (FCA) admitted that LIBOR is becoming unsustainable due to the slowing lending activities between banks and suggested a transition to alternative benchmark rates.

The regulator decided to support LIBOR until 2021, and then start the transition to the Secured Overnight Financing Rate (SOFR), which is expected to fully replace LIBOR by 30th June 2023. The SOFR is the benchmark rate used for loans in USD and is based on actually observed transactions in the US Treasury market rather than estimates. While both the US and UK are planning to use the new rate, other countries are exploring options to use their own version of a benchmark rate for when LIBOR is retired.