What are “Spreads and Shifts”?

To understand spreads and shifts, more specifically trading spreads and shifts, we need to know that the term spread refers to credit spread. This is the difference between the yield on a bond (for example, a corporate bond) and a Treasury (government) bond of comparable maturity or duration. The size of the credit spread varies across time. In uncertain times, we see higher spreads (i.e. credit spreads widen) as investors are more risk-averse and tend to move into government bonds. On the other hand, in bull markets or times of low economic uncertainty, we tend to see narrower spreads (i.e. credit spreads narrow).

Regarding shifts, there are a number of ways that the yield curve (government bonds or corporate bond yield curve) can shift.

Trading on Spreads and Shifts

We can now look at three different scenarios  for the individual bond or the economy to learn more about how to trade spreads and shifts:

Another way to do this is to trade a credit default swap (or CDS) – we can then sell the CDS and receive a premium.  As the creditworthiness improves, the CDS will start to trade lower and an investor could monetize the difference. So, this scenario of improved creditworthiness and the trading patterns following it will of course be very similar to the general expectations of an improved economy.

We can do this through the CDS market also. We could buy the CDS, pay the premium, and then as the credit spread widens, we should be able to trade out of the CDS position and monetize the difference.

Credit spreads can fluctuate due to several reasons. It can be due to changes in expected inflation, changes in the supply of credits, and the demand for investments within particular markets or durations.

Yield Curve Shifts: there are a number of ways that the yield curve can shift – it can witness parallel, flattening, steepening, twisted or humpedness (positive or negative) shifts. However, in reality, corporate and government bond yield curves might not move in the same way. One can have different shifts in the corporate yield curve versus the government bond yield curve. Further, credit spreads will see different changes depending on maturities and this is important to bear in mind i.e. spreads will not change uniformly across maturities.

In the example below, we are looking at a very simple trade. We expect Company A to strengthen in terms of creditworthiness. Therefore we expect this company to do well and the expected risk to fall. Further, we assume no change in the treasury yield curve and hold a US$5 million long position. Based on this information (given below), we need to find out the resulting profit or loss, if the scenario stated below comes true.

Currently, the risk-free rate is 1.75% and we expect it to remain the same. The current spread over Treasuries is 3%. If we are correct, we could expect the spread over treasuries to come down (contract) to 1.8%, from 3%. The bond terms are very simple. The remaining time to maturity is 5 years. The annual coupon is 5 and the face value of the bond is 100.

Now, first, we need to calculate the price of the bond. For this, we use the Excel PV formula and incorporate this information: the discount rate (the risk-free rate of 1.75%) plus the current spread over treasuries, which is 3%. Then we include the number of periods (5 years) which is the remaining time to maturity, the payment (which is the annual coupon – 5), and the face value (100). This gives us the price of the bond now. So, now we could expect to pay $101.1 per bond. However, if the spread over treasuries contracts to 1.8% (and the spread becomes lower) we can expect this bond to trade up to a higher amount per bond i.e. $106.5 per bond.

This is quite a significant return on investment, driven by a large change in the credit spread – as well as the relatively long duration of this bond. 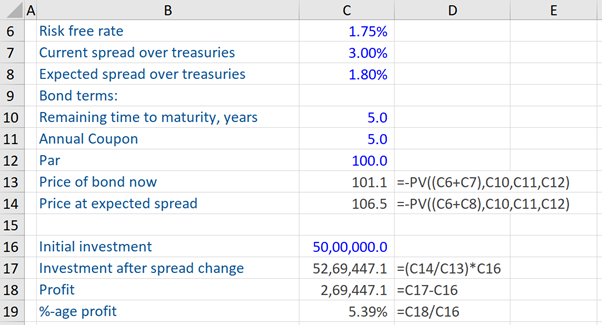 In the second example, we expect Company B to weaken in terms of its creditworthiness. How do we trade on the back of this? We assume no change in the treasury yield curve and a US$5 million short position. Now we need to find out the profit or loss if the below scenario comes true. Calculating the loss in percentage terms, we reach 5.04%. 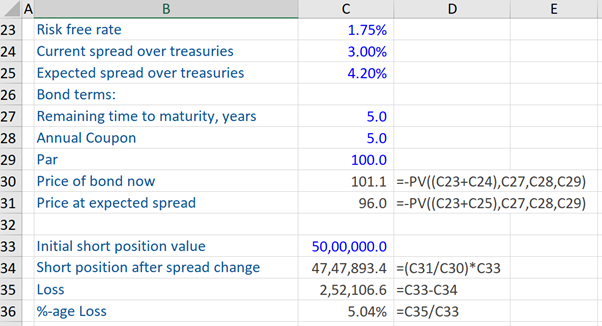