What are Carried and Promoted Interests?

In deals where assets are funded by private equity, the structure of the equity investment is typically a vehicle that is comprised of investors, or Limited Partners (LPs). These tend to contribute 90-95% of the funds, alongside the fund sponsor, or General Partner (GP) who often contribute 5-10% of capital. The GPs negotiate a more advantageous split of the profits than that of their pro-rata capital invested. This is due to the additional work undertaken to create the fund, find and vet the targets, manage the transaction as well as the ongoing investment. When a GP takes a greater share of the profits than a pro-rata investment, it is called a ‘carried interest’. Typically, in real estate deals using the same GP/LP structure, the name for this concept is a ‘promoted interest’.

The Purpose of Carried and Promoted Interest

Private equity sponsors, or GPs, are compensated in two ways with regard to their investment funds. The first is the management fee which is based on the LP’s assets under management by the sponsor firm. This is typically around 2% and covers or contributes to the administrative costs of the sponsor firm. The carried interest (15-20%) is the sponsor’s compensation for finding the transaction, negotiating the terms, signing on to the debt, and managing the transaction until disposition. (In real estate, the promoted interest is typically 20-30%.) The carried or promoted interest is calculated on the profits of the deal after the debt has been paid back and any preferred returns have been achieved.

Let’s assume a sponsor has raised an investment fund and the LPs have contributed 95% of the capital with the sponsor or GP contributing the remaining 5%. These two investment levels represent the pro-rata investment of capital. As an enticement, the GP has offered the LP the first 8% of return on the deal. This will be an annualized yield of 8%. Once the LP has achieved that return, the GP will be entitled to the remaining 20% of the profits of the deal. This is the carried interest. In this example, we will assume the LPs are granted their return of capital before the GP can calculate its carried interest. This would be called a European-style waterfall.

In this example, the sponsor locates a target asset and completes the transaction, with the total equity commitment at $500. There have been no cash distributions during the hold period, but at the end of year five, the asset is sold for a profit with an equity value of 200.

Assume a building is being purchased for $1,000 and the equity investment is $400. The LPs are bringing 90% of the funding and the GPs 10%. Both investors will receive a preferred return of 8% and the capital will be repaid before additional returns are earned. This is known as a pari passu investment.  The GP has asked for a promotion of 30% of the LP profits post preferred.  There are no distributions but in year 5, the building is sold and the equity value is $750. The promotion is calculated as follows: 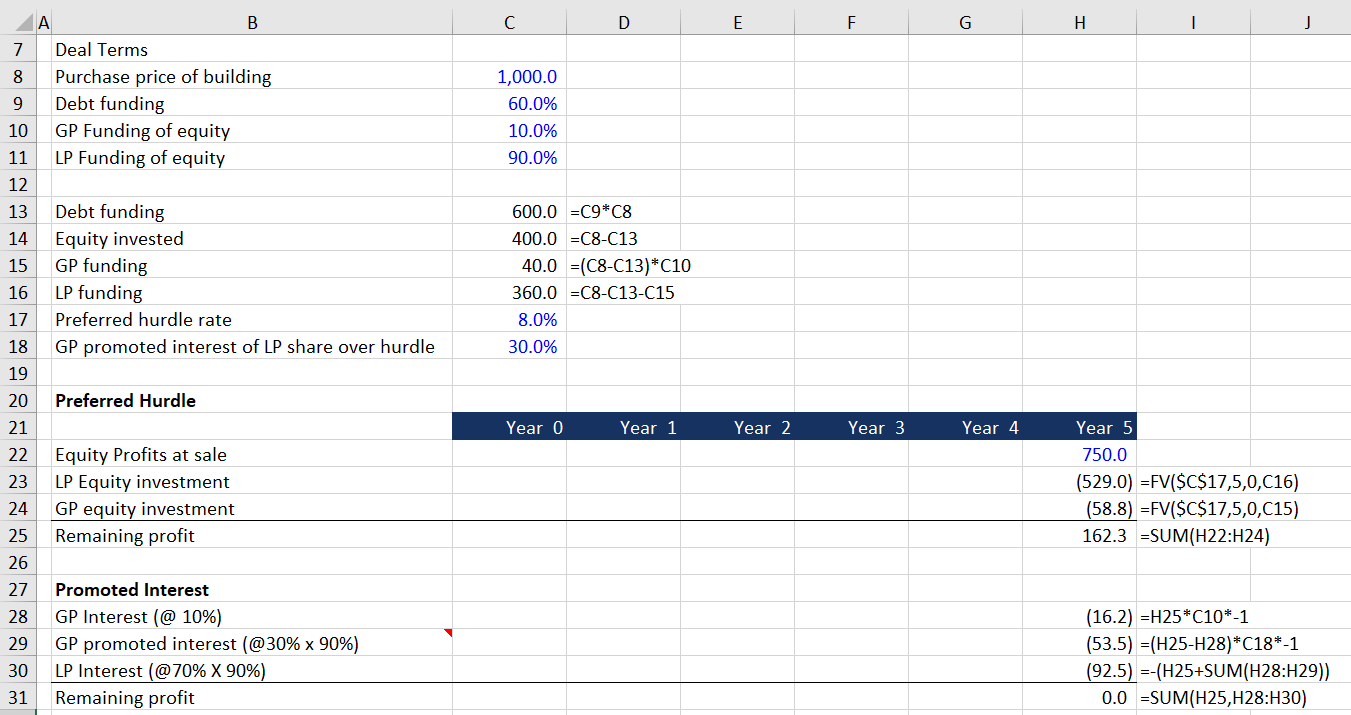