What is Control Premium?

Control premium refers to the premium potential buyers are willing to pay to acquire a controlling stake in the equity of a business. Control premiums play a vital role in the transaction comparables analysis, a relative valuation methodology, which compares the price paid in an M&A transaction to the unaffected share price (so the target must be quoted). The transaction comparables method is a relative analytical tool where the valuation insight comes from analyzing and understanding a peer group of transactions.

While there may be many transactions in any industry, valuers consider only those where the buyer achieves control. Such transactions help analysts get insights on the premium buyers are willing to pay to acquire a controlling stake in a business. Achieving control is important as it gives the acquirer ability to set strategy of the target, make operational improvements, extract cost savings, and ultimately, create value.

When buyers seek control, they are looking to purchase more than 50% of the outstanding shares. Achieving control allows buyers power to make decisions such as restructuring employees, changing business processes, or setting an entirely new strategic direction for the business. To achieve these goals, they need to incentivize the majority of existing investors to give up their shares. On average, the control premium usually ranges between 20%-40% over the unaffected share price (the price for a minority stake with no control). Acquirers agree to pay a control premium because they believe they can create higher value by gaining control over the decision-making process.

Let us say a company’s unaffected share price is 75, and the offer price is 93. How much is the control premium in this case? You can calculate it using the following formula:

The control premium for the above transaction as 24%.

The Role of Control Premiums in M&A Models

Control premiums are a key assumption in any M&A model. It has an impact on the total amount of financing required, earnings accretion or dilution, exchange ratios, post-deal ownership of the combined business, and value creation. The control premium assumption is always sensitized once the model is completed. The control premium is often calculated on several pre-offer prices to isolate the effects of market rumors. Often analysts will calculate the VWAP or the Volume Weighted Average Price of the stock in the months prior to the deal. The VWAP is calculated by taking the share price weighted by the daily traded volume of the stock over a time period.

Here is an excerpt from a press release for Kraft Foods’ initial offer for Cadbury. You can see there are three dates, indicating different control premiums over different share prices. 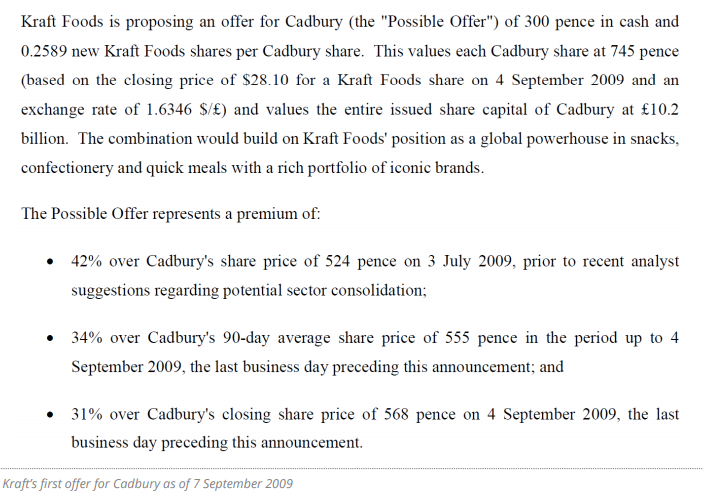 In another example, when Intel acquired McAfee in August 2010, it paid a premium of 62% over McAfee’s previous day close. While the percentage seems higher than the usual range of control premiums, this number should be looked in context. Over the prior 12 months before the deal, McAfee’s share prices had suffered a significant drop in April and May of 2010 due to millions of computers being affected by an erroneous virus definition. When Intel first made an offer, it was barely 5% higher than McAfee’s 52-week share price high.

When Disney acquired Marvel Entertainment in 2009, it paid a 30% control premium above Marvel’s traded share price. At the time, Disney believed, it could create greater value with Marvel’s existing brand by bringing them under its own umbrella.