Debt is a significant source of financing for many businesses. Debt is an amount of money borrowed from one party to another on the condition that the amount borrowed (principal) is repaid at a later date. The agreement almost always includes interest payments too. Both interest and principal must be paid on the date due regardless of the circumstances of the borrower. Failure to make a payment is called a ‘default’ and the consequences can be severe, including bankruptcy. The detailed lending terms are prearranged between the lenders and borrowers in the loan documentation.

Debt represents a present financial obligation and as such is reported as a liability on the balance sheet. The other side of the accounting equation will result in an equal increase in balance sheet cash (resource of funds).

Short term debt is debt whose principal is payable within the next twelve months. These are categorized as a current liability on the borrower’s balance sheet.

Long term debt includes instruments whose term is longer than twelve months. This is reported on the balance sheet as a non-current liability until the final year of its term when it is categorized under current liabilities as long-term debt, currently due.

In the table below the items classified as debt are outlined in red. In the current liabilities we have three types of debt items: 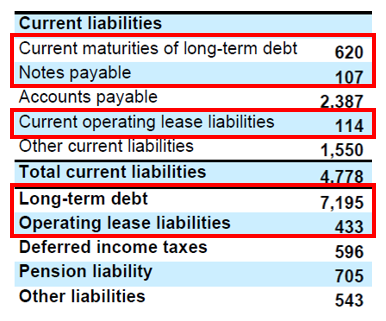 The main types of debt products are grouped into four categories depending on whether they are due to be repaid within or over twelve months at inception, and whether they are traded in the public securities markets or are created by a direct relationship between the borrower and lender.

Each of these debt products will favor different individuals and companies, depending on their financial interests. A small company facing cash flow problems may need to borrow cash for a short time period (revolving credit facility). However, a large company looking for sources of cash to acquire a target in an M&A deal would require a much larger long-term debt product.

As debt repayments are made, the loan liability will decrease. Interest is normally due in cash on a regular basis (usually quarterly for corporate bank loans) and this will represent an expense against the company’s profits. The other side of the equation is a reduction in cash. All interest is expensed into the income statement over the term of the loan.

Below represents the effect on the balance sheet for year 1 on a four-year loan of 100. The loan has straight-line repayment and an interest rate of 5% on beginning balance.

As the loan is repaid it will reduce the balance reported in the long-term liability of the loan. The current portion of long-term debt represents the debt repayment for the year. In this example, the balance sheet will report long term debt as 50 and the current liability as 25 at the end of year 1.

In the notes to the accounts, companies detail the individual repayment dates and interest rates of the different loans and bond issues they have outstanding, along with a five year repayment schedule.

Here is Kellogg’s debt note disclosure. The list of their outstanding bonds:

Note the total debt is 7,815m of which 620m is shown in the current liabilities and 7,195m in the long-term liabilities. Here is the projected repayment of the existing debt (assuming no new issuance of debt):

Debt represents an interest-bearing liability and is used in the calculation of net debt.

Net debt is used in many frequently used leverage ratios, including net debt/equity and net debt/total capital (total debt plus shareholders’ equity) and also within the debt / LTM EBITDA ratio to measure a company’s ability to service its debt. Using net debt rather than total debt with regards to credit analysis assumes the company could use its surplus cash and short-term investments to pay back debt if the company were to experience financial distress.

Debt is also used in the calculation for return ratios. Return on Capital Employed (ROCE) is a common metric used that expresses the after-tax, pre-financing profits of a business as a percentage of the capital invested by the business’s capital holders. Debt is part of the capital invested along with shareholders’ equity. The metric helps analysts measure both the operational profitability and asset efficiency of a business.