What is the “Income Statement”?

The income statement is a key financial report which shows a company’s sales (or revenue) less expenses for the period in question. These records show the company’s ability to both generate profit and manage its expenses. The statement is great for analysts to use as a financial performance indicator of a company over a specific period, as it provides relevant information including the company’s turnover during a financial year.

Below is an example of the Coca Cola Company’s income statement. It outlines revenue first, followed by all expenses. The expenses most easily associated with sales come first. For example, cost of sales (or cost of goods sold) is immediately below sales, followed by expenses to support the business. Financing the business comes next, followed by taxes on profits. The last line on the statement is net income, which is the profit after all expenses have been deducted for the period. 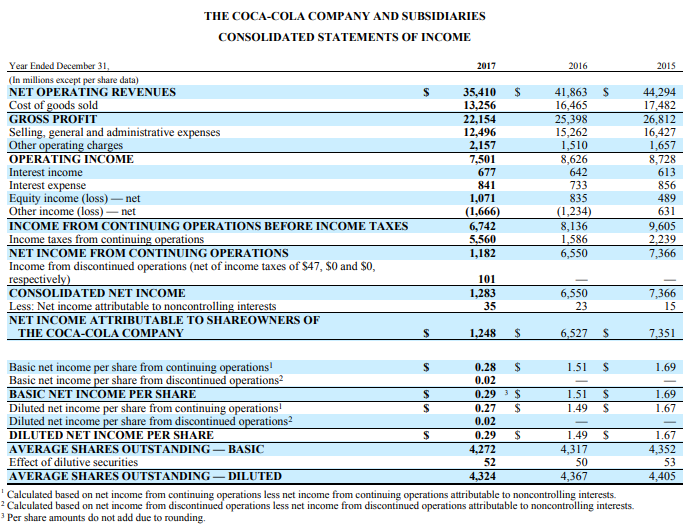 The accruals concept is the main principle applied when building the income statement. This means that sales are recognized in the period in which they are generated. The expenses associated with that revenue generation and/or period are also recognized. Expenses are matched with sales where possible, and if not possible, then with the time period in question. It’s important to note that the statement makes no attempt to report on the cash impact of either costs or expenses.

Key Elements of the Income Statement

The total income generated from sales within a particular period. Revenue is recognized when it is earned and cannot be recorded until the business actually delivers the product or service.

These are costs directly associated with the goods or services provided. Such costs might include direct labor cost, materials or direct overheads. The costs are directly proportional to revenue; this means that when revenue increases so too will these costs.

Looks at the profit generated by a company from its main costs and income attributed from its goods or services. This can be calculated by subtracting the COGS from the revenue.

Costs which are required to generate the sales and flow of income for the company but not directly associated with the goods/services. Such examples may include rent, advertising, utilities or insurance.

The income earned from a company’s core activities, calculated by subtracting the operating costs from the gross profit.

Many companies have non-controlling investments in a business and as such have part ownership rights. They are entitled to any profits if their equity investment produces a positive net income.

This expense is shown on the income statement of a company from debt or capital leases.

An unavoidable expense outside the control of the company, it varies on different tax rates but will be a percentage of pre-tax profit. The expense is disclosed separately on the statement due to this.

The net earnings attributable to shareholders of the company in a given period once all expenses are included. It represents the profit figure before any dividend pay-outs.

The proportion of profits attributable to shareholders in a subsidiary of the business who do not have control.

The net earnings attributable to shareholders after deducting non-controlling interest. These earnings represent the net income due to common shareholders and companies will use this as a basis for dividend declaration.

Net income to common shareholders divided by weighted average shares outstanding. An important measure of profitability that is used in equity valuation, such as P/E multiples (price/earnings).