What are Commitment Fees?

A commitment fee is a fee charged on the undrawn portion of a lending facility.

Banks often give companies a ‘credit facility’. Often in the form of a revolving credit facility, but sometimes in the case of project finance structures as part of a term loan. A facility means the borrow doesn’t have to draw down the loan immediately, but they have the right to draw the funds at any time within an agreed period up to an agreed limit. Interest is only charged on the drawn part of the loan.

When banks calculate the amount of equity capital they must set aside for regulatory purposes regulators take a worst-case scenario so they force banks to use the facility amount and not the drawn amount.

How do Commitment Fees work?

For example, if a bank gives a company a revolving credit facility of 100m at an interest rate of 5%, but the company has only drawn down 30m the interest expense is:

The bank now has a problem as the regulators force it to allocate equity capital to the whole 100m, not just the 30m drawn, and that capital needs a decent return based on lending, not just 30m but the whole 100m.

The Economics of Bank Lending

It is worth understanding the economics of bank lending before going further. Let’s assume the loan is 100% drawn, after making a few assumptions we can calculate the profitability: 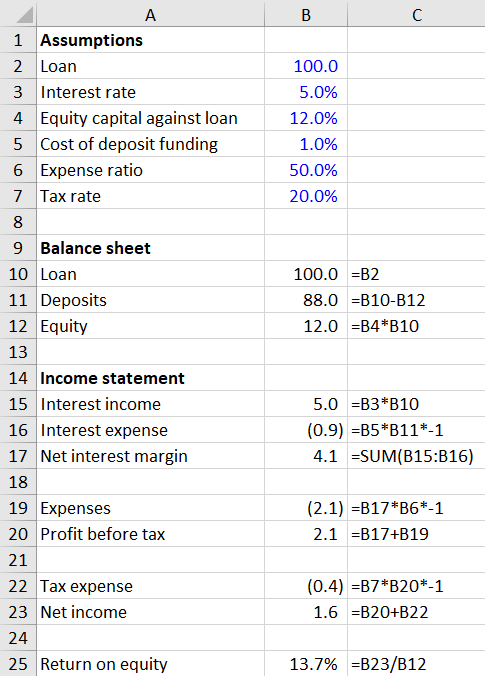 We are assuming a capital ratio of 12% so 12m of the loan is funded by equity and 88m is funded by deposits. We can then calculate an income statement using the interest rates, an assumption for the expense ratio and an assumption for the tax rate. Finally calculating the return on equity is important as that is a key value driver for a bank. So assuming the loan is fully drawn the bank gets a return on equity of 13.7%.

Now look at the return if only 30m of the loan is drawn and the bank still allocates 12m of equity capital against the facility: 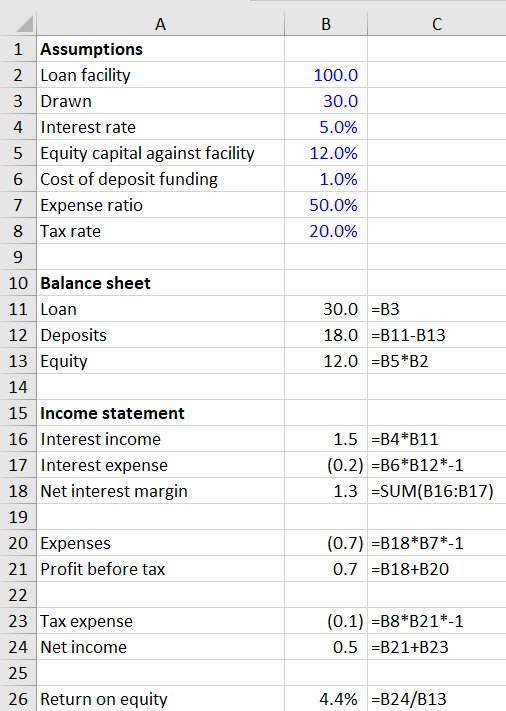 The key problem is the regulators still require 12m of equity capital against the facility despite only 30m being drawn. So the bank only makes 0.5m net income against equity capital of 12m and generates a terrible return on equity of 4.4%.

Now let’s take a look at our example with a commitment fee representing 50% of the spread between the interest rate and the deposit funding cost: 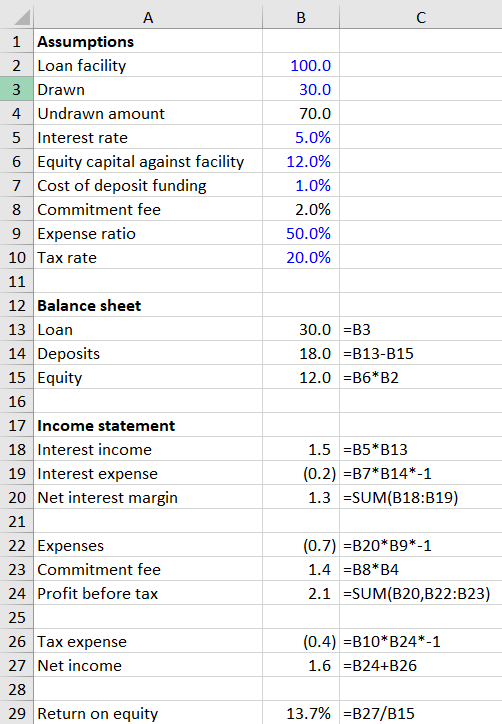 So here we are assuming there are less expenses if the loan is not drawn down as it doesn’t need to be serviced. The commitment fee increases the income and results in a much higher return on equity giving the bank a reasonable return on the overall loan.

Usually, commitment fees will be baked into the interest income line of the income statement and won’t be shown separately – however, we wanted to illustrate the issue clearly so put the commitment fee into its own line.