What is a “Bull Market”?

A bull market is a sustained period of price rises and is most often associated with stock markets. However, other asset classes, such as real estate, commodities, and currencies can also have bull markets. While there is no formal criteria or measurement for a bull market, there is a commonly accepted defining threshold. A bull market occurs when there is a 20% (or more) rise in stock prices, after a period of a 20% price decline and followed by another 20% decline. A bull market can last for months or several years but the specific dates can only be determined in retrospect.

Whether it is stocks, bonds, commodities, or other types of investments, investors tend to make a profit at any purchase price in a bull market, as prices generally continue to rise for an extended period of time i.e. there is a general trend of an upswing over time – which typically results in new all-time market highs being reached.

The opposite of a bull market is a bear market which is a period of sustained price decline.

Bull markets generally happen during time periods when the economy is strong or strengthening. There will often be strong GDP growth, falling unemployment, high consumer confidence, and company profits will be on the rise – all of which support price increases in the stock market.

Bull markets are often related to higher investor confidence because there is a belief that stocks will continue to rise. As a result, investors continue to invest in the market to make profits and magnify the effect of the bull market.

A bull market is usually characterized by a frenzy of Initial Public Offering (IPO) activity in a swathe of different companies across all sectors. Companies are able to raise substantial amounts of capital in the primary markets for the purpose of expansion, capital investment, or repaying debt.

Secular and cyclical markets can both be seen in both bear and bull markets.  It is important to note that the dates of bull markets can only really be demarcated in hindsight, as you need to reach that 20% change in the opposite direction to be able to declare a bull market.

When the stock market is in a bull phase, it tends to rise further due to more positive investor sentiment, speculation, and belief that the market will continue to rise. As a result, stock prices rather than being based on fundamentals or on their actual underlying value, tend to be overvalued. Consequently, valuations become overstretched and tend to reach unsustainable levels. Such a bull market phase cannot continue forever. Eventually, it comes to an end and stock prices tend to nosedive or plunge.

Market Indices and the Bull Market

Stock market indices, such as the S&P 500 index, which is generally the most widely followed stock market index in the US, are used for the analysis of bull and bear markets. After the recent global financial crisis (2007-2009), the S&P 500 hit a low in early 2009 but that bear market could not be officially declared as over until a reversal of 20% in the opposite direction and since that period a new bull market was created of sizable gains. The longest bull market in history was between March 2009 and 2020. It ended with the onset of the Covid-19 pandemic.

Historically, bull markets tend to have a longer duration than bear markets with higher increases in stock prices versus the decline.  If we take a longer look, going back to 1926 to date, bear markets saw a decline of an average (i.e. average return) of only -45% versus the bull appreciation of 159% in the US. In terms of duration, again bear markets only lasted 2 years, versus 54 months for bull markets.

A simple moving average is a statistical technique that calculates the average of a selected range of stock prices, usually closing prices of stocks by the number of periods in that range. It is one of the most widely used technical indicators used to signal a bull market. The common moving average lengths that are used by analysts for stock market purposes are 10, 20, 50, 100, and 200-day moving averages. The greater the average length, the more the smoothing effect i.e. less is the impact of sudden fluctuations in stock prices. 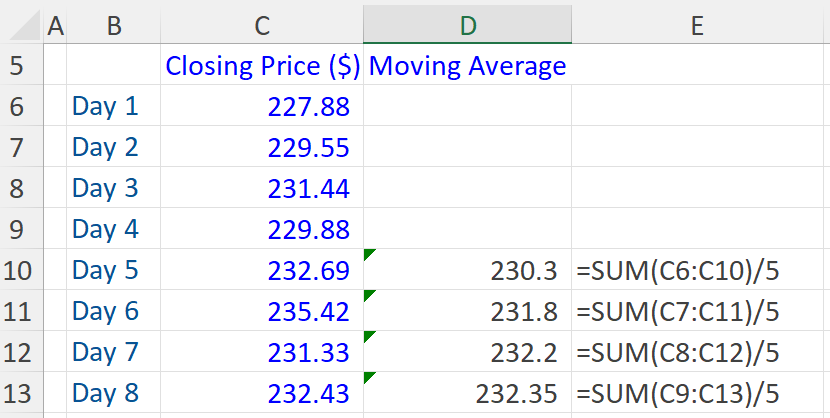