Beta is a measure of the relationship between the rate of return of a company’s stock and the overall market return. It compares the volatility of a stock relative to that of the market. Beta indicates how an asset’s value has reacted to either a movement up or a movement down in the market.

Beta is an important component in the Capital Asset Pricing Model (CAPM). The CAPM is an asset pricing model that explains the relationship between the expected return investment and the risk for a specific security. CAPM is based on the assumption that only systematic risk should affect asset prices.

Systematic risk, or market risk, is a risk that cannot be avoided at the firm level and is inherent in the overall market. It includes risk factors that affect the market as a whole. It is non-diversifiable within a portfolio and all firms in the market are exposed to it. Factors constituting systematic risk include interest rates, economic cycles, natural disasters/pandemics, currency fluctuations, and inflation.

Unsystematic risk refers to the risks inherent in a specific company or an industry. It can potentially be avoided through diversification.

Beta measures systematic risk only and not unsystematic risk. For example, positive macro events such as economic booms are likely to result in greater gains for all companies. Likewise, negative macro events such as pandemics or natural disasters are likely to result in reduced gains for all companies. A beta greater than 1 indicates that an investment has higher systematic risk than the market. It also indicates that the investment is likely to generate higher returns than the benchmark index in an up market scenario. In comparison, the investment is also likely to deliver greater losses than the benchmark index in a down market scenario.

We will use the following information about two companies to further investigate beta. Company A is a relatively smaller company that is more sensitive to economic fluctuations. Company B is a larger company with more predictable earnings and dividends. We are asked to calculate the expected returns on the stocks of these two companies.

Companies with lower beta (such as company B) tend to underperform in up market scenarios. However, they tend to perform better (or, at least, less bad) in a falling market. Insurance stocks, utilities, and food retail are examples of industries with lower beta values.

Data on beta is widely available through many financial data providers. Regression analysis is the most common and practical method for estimating beta. The beta for any asset can be estimated by regressing the returns of that asset against the returns of the index chosen to represent the market portfolio. The slope of the linear regression is the beta of the security. Beta calculations can also be carried out in Excel using the ‘slope’ function.

Here is an example of the beta for a list of food companies. 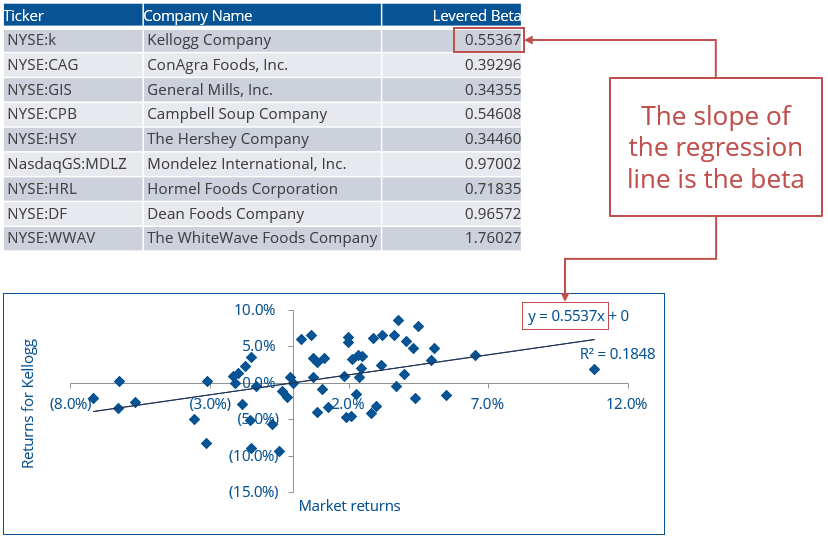 Taking the example of the Kellogg Company shown in the above graph, the returns from the market are shown on the horizontal axis and Kellogg’s returns on the vertical axis. Each blue diamond represents the return on the market and Kellogg’s for a particular period of time and the linear regression analysis then identifies the line of best fit all of the data points.

The slope (or gradient) of that line is the beta. The slope represents the level of movement in returns of a given security (in this case, Kellogg’s share price) for each unit of movement in the market. In this case, the gradient is 0.55367, which means that for every 1% increase in the returns on the market, it would be expected that Kellogg’s would generate an extra 0.55367% return

Generally, large brands (such as the Hershey Company) with greater predictability in their earnings tend to have lower beta values. Smaller brands tend to have higher betas.