Earnings Before Interest and Taxes (EBIT)

EBIT is the abbreviation of “Earnings before Interest and Tax” and is a very useful calculation for measuring a company’s performance. For many companies, EBIT can simply be their operating profit which can be found on the income statement. EBIT shows how profitable the company is from its operations and does not include expenses related to taxes and capital structure, such as interest and tax expenses. Often EBIT will not equal the operating profit. This is due to the company incurring expenses that are not part of their recurring operations. Therefore they will be added back to complete the EBIT calculation.

With this formula, the starting point is operating profit (found on the income statement). We start at this figure as we are only interested in the earnings before interest or tax, as these are fixed and not relevant when forecasting. Sometimes companies do not report operating profit. In this case, you will need to start from the reported net income figure and add back interest and tax. But, this will only provide you with operating income which may not be the same as the final EBIT figure that analysts are interested in. We need to consider any further adjustments which can be made to the operating profit figure.

How is EBIT Calculated?

As mentioned at the beginning, sometimes the operating profit of a company needs adjustments to arrive at EBIT. When stakeholders calculate EBIT, they are only interested in the earnings of the company which relates to its operations. Sometimes a company may incur an expense which is not part of its normal business but is still included in expenses, such as restructuring charges or impairments. This means that in order to calculate only the earnings generated from the business operations, any one-off expenses need to be added back on (one-off incomes or gains are deducted). Below is the order of steps you should complete to arrive at the EBIT figure:

Use the following income statement and footnotes to calculate EBIT. 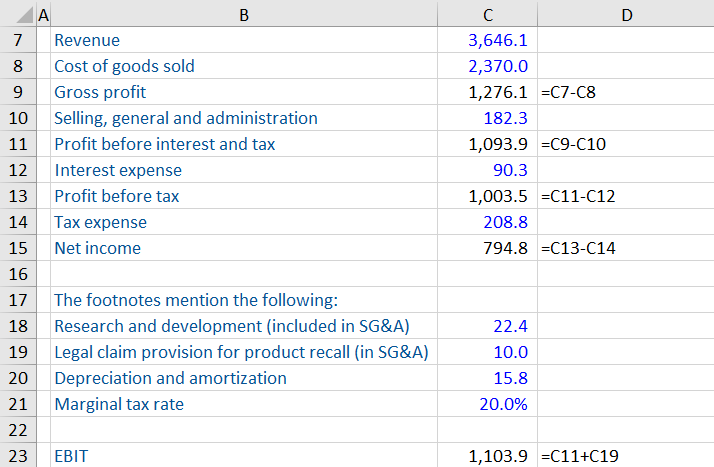 The calculation starts at profit before interest and tax (operating profit) and adds back the legal claim provision included in SG&A (non-recurring item).

Bonus: To calculate EBITDA, you would need to add back the depreciation and amortization expense in cell C20.

Make sure to download the worksheet to try a bonus workout with a full solution provided.

What One-off Items Need to be Adjusted?

Why is EBIT a Popular Metric for Analysis?

EBIT is a great tool to use as a performance indicator for a company. Stakeholders want to calculate the earnings a company generates from its operations. By looking at this, an investor can see how well run the company is (are costs too high? are profit margins relative to the sector?). Investors are interested in recurring financials which can be forecasted. It is also relatively easy to calculate which makes it a great metric when comparing different companies.