What is Operating Profit?

Operating profit is the total profit a company generates in a given accounting period from all its operations. It can be found in the income statement and is calculated by subtracting all operating costs not directly associated with production (selling, general & administrative) from the gross profit. It is an important figure on a company’s reports and investors are interested as it shows the profit generated when not including unavoidable expenses, such as interest or income tax. It is used for many financial metrics and links closely to EBIT and EBITDA. 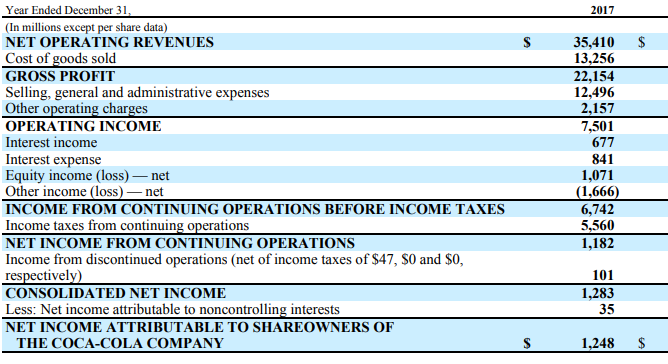 Operating profit is before financing and government costs. It represents the profit generated from the operations of a company and is reported after revenue and any expenses associated with the operations of the business such as COGS and SG&A. Many companies report it as “operating income” and these are used interchangeably.

The calculation starts with the operating profit and divides it by the sales for the same period.

What Does the Margin Show?

Taking our example for the Coca Cola company, it shows that for every $100 sale made, $21.20 contributes towards the operating profit. In this case, the margin is high and shows Coca Cola are managing their costs in order to generate a high percentage of profit. There are many factors which can affect the operating profit margin (pricing strategy, price of materials and direct labor), so it is a great reflection on management’s operating decisions. A company looking to acquire another company (merger or acquisition) will want to assess areas of improvement. This may be high cost or marketing strategies in order to generate a higher revenue.

Operating profit margin is only a figure on its own and is best used when comparing to similar industries or historical data. This is due to different industries using varying business models where high labor costs might be a normal part of operations. Ratios only make sense in context.