What is “Project Finance”?

Project finance allows shareholders to raise finance for a project without the lenders having a claim on their other assets (known as ‘non-recourse’ financing). As the financing is standalone, project finance is only suitable for investments which generate predictable cash flows, and where a lot of the risks are distributed away from the operational company – typically known as a ‘special purpose vehicle’. Typical projects would be large infrastructure programs sponsored by governments.

The special purpose vehicle is the beating heart of the transaction – it holds all the relevant contracts and owns the operational assets. The contracts are key to understanding the structure and how risk is distributed. They include:

Project finance transactions work well when risks are clearly identified and passed on to the counterparties best able to manage them. For example, a take or pay contract passes on the risk of not selling the product to the customers. Ideally, the Special Purpose Vehicle (SPV) will retain few, if any, risks, allowing the financing to be easily serviced by predictable cash flows generated by the project.

If there are lots of similar prior projects being completed e.g. oil refineries or solar power plants, risks become more easily identifiable and predictable. Investors will be much more comfortable financing projects with successful prior examples. However, one-off projects e.g. the Channel Tunnel, are more unpredictable and therefore more difficult to finance.

The SPV needs stable predictable cash flows to service the debt, which can be anything up to approximately 80% of the project financing. Traditionally, most of the financing came from banks via long-term syndicated loans. Tightening bank capital requirements (particularly asset and liability maturity matching) has made bank financing less competitive and bond issuance is increasingly common. Historically, syndicated loans could, in some cases, have maturities in excess of 20 years.

Usually, a lead bank drives the project forward and they are known as the ‘Mandated Lead Arranger’. This bank arranges the syndication process, and, importantly, gets the majority of the fees.

A key measure when structuring the transaction is the Debt Service Coverage Ratio (DSCR) which is the Cash Flow Available for Debt Service (CFADS) divided by the interest and principal repayment in any year. The DSCR should usually be at least 1.3x.

Most structures also require a Debt Service Reserve Account (DSRA) which is the requirement to have cash on hand equal to the next period’s (usually six months to one year) interest payment plus debt repayment.

Most project finance models have to start with some assumptions – how much you estimate to spend constructing the project, what percentage of financing will come from equity financing versus debt, and also the cost of different debt items. Sometimes the project will need to build up a level of inventory in the last year of construction in preparation for the operational period. Usually, the assumptions are split between the financing and operational assumptions. Here’s a good example of an assumption set: 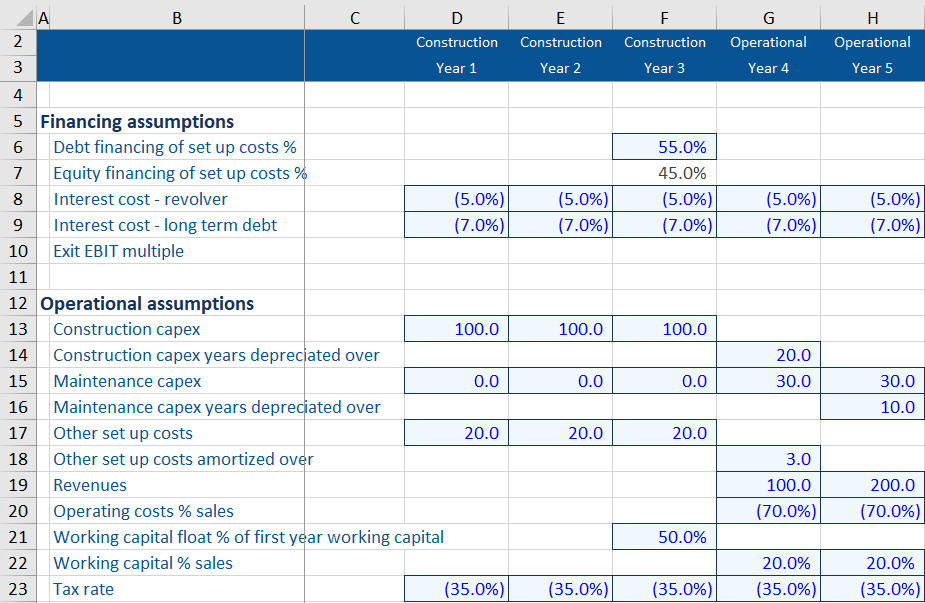 Next, you build the sources and uses of funds:

At this point, you won’t actually have the interest expense (the graphic is from the final version), but you can complete everything else. The capex is the construction costs, while other set up costs are soft costs. The debt and equity issue is usually made on a pro-rata basis, based on an agreed percentage.

Next, model out the depreciation of the capital expenditure in both the construction period and the maintenance capex in the operational period. Be careful not to over depreciate or amortize the capex and soft costs. 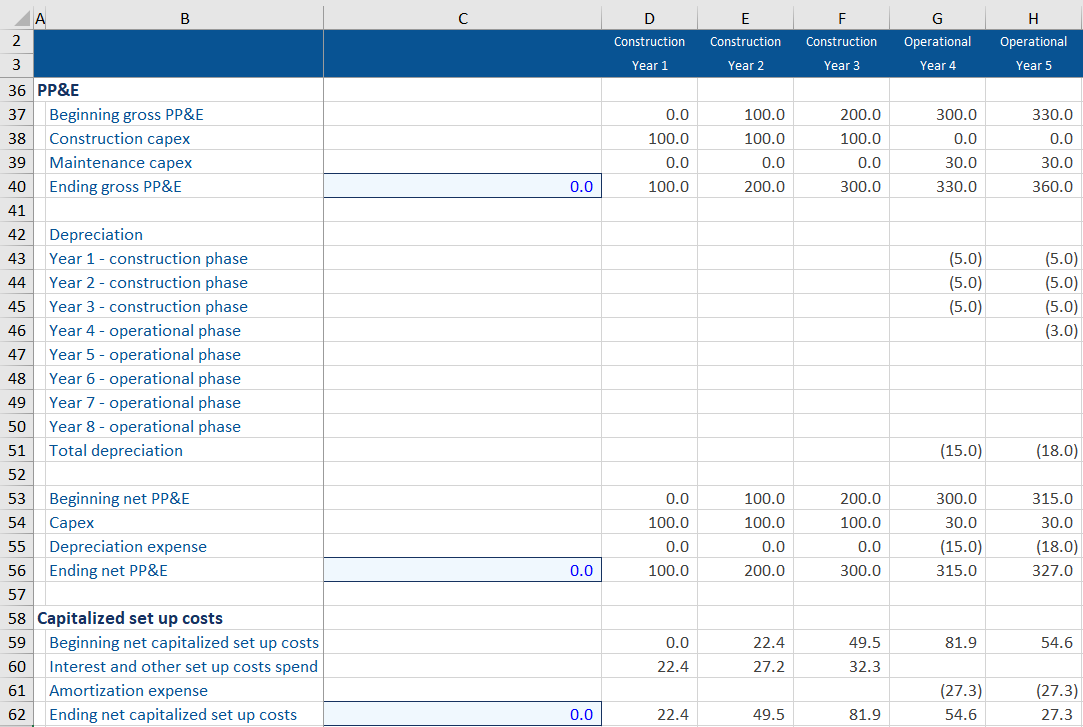 Next, you can build out the balance sheet and cash flow statement, just during the construction period. There’s no income statement during construction. The balance sheet will balance if your sources and uses balance – even though you haven’t completed the revolver and long term debt lines yet! 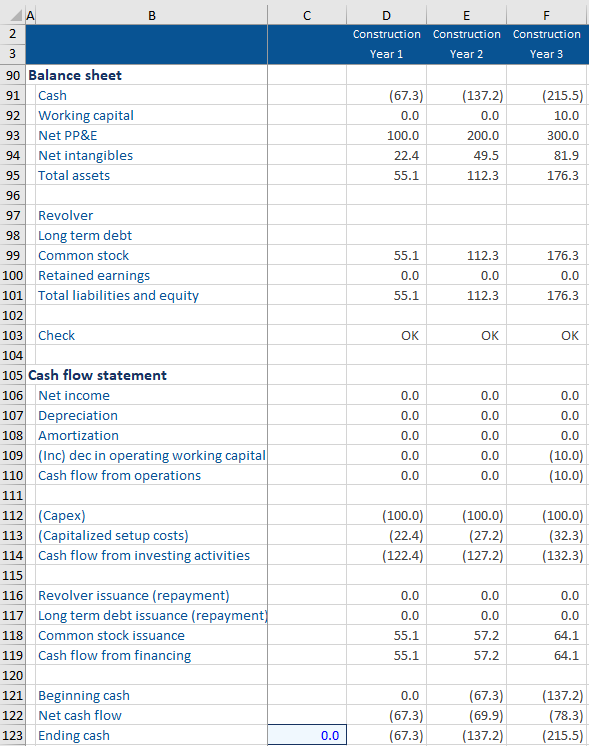 Now you can model out the income statement, other calculations, and complete the balance sheet in the projected years: 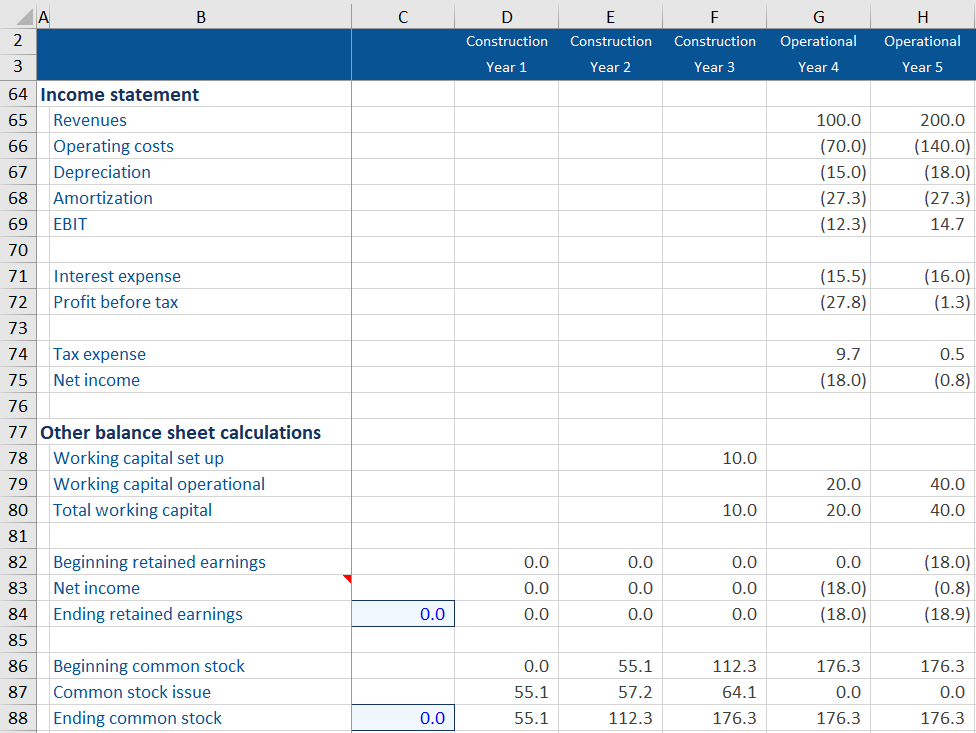 Depending on how you construct the three statement models, you can then model out the repayment of the different debt lines (assuming you have kept them blank until now – note the screen-shots are all from the completed model). The model here is simplified. Often the debt repayment will be driven by an assumed Debt Service Coverage Ratio. In that case, you will take CFADS and divide by the DSCR to get the amount of cash you can use for interest and debt repayment. Note the model does not include a Debt Service Reserve Account for simplicity. 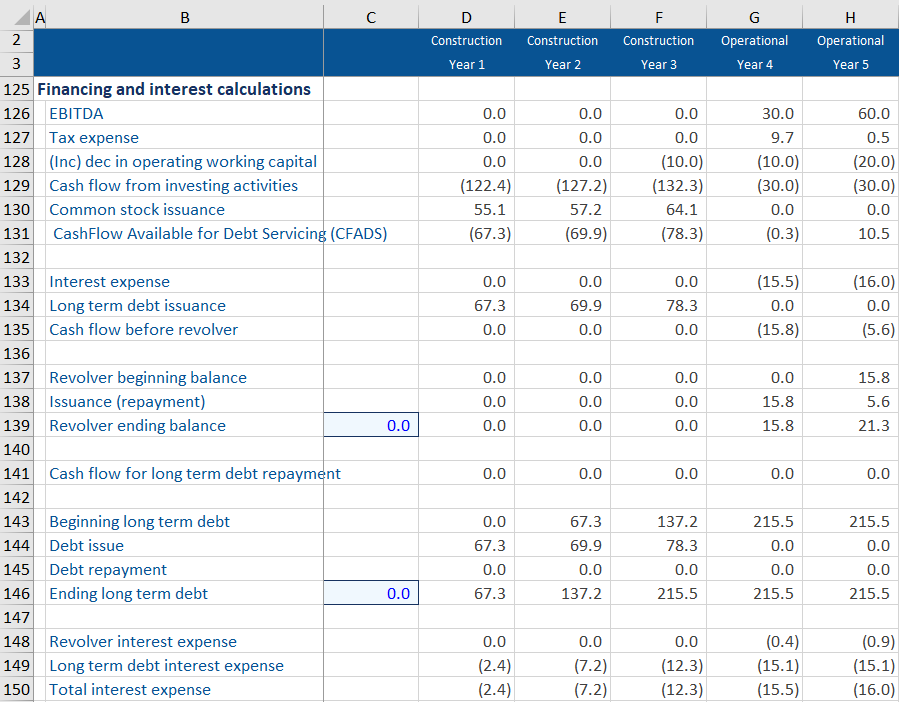 Now you have completed the debt sheet, wire up the ending balances of the revolver and long-term debt into the balance sheet. Last but not least, you can calculate the returns to equity holders. Often you won’t expect to be able to pay dividends while the debt is outstanding, so they will get most of their return by the sale of the project, or sometimes the restructuring of the debt. If the project is a mine or oil well, then dividends will be paid, but the debt holders will generally get most of the cash-out first.

The actual amount of the expected return will depend on the risk of the project. An internal rate of return in the mid-teens is not unusual.

The example above is simplified. You can download both the template and answer version of the model here. Want to know more – and model out a full project finance model with a Debt Service Reserve Account, repayments driven by a Debt Service Coverage Ratio, and an asset retirement obligation? Want to understand the different contracts, risk management, the syndication process, and how to calculate returns to shareholders? Then sign up for one of the most comprehensive project finance online course. Pass the rigorous final test and become certified alongside the very best analysts on Wall Street.