What is Return on Invested Capital?

Return on Invested Capital or ROIC expresses the after-tax, pre-financing profits of a business as a percentage of the capital invested by the business’s capital holders. It is a useful measure of both the operational profitability and efficiency of a business.

The metric is also known as ROCE or Return on Capital Employed. These metrics both provide the same result, however, ROIC reviews the efficiency and profitability of returns from the investor’s perspective rather than the actual investments made by the business.

Let us understand the numerator and denominator for calculating ROIC in detail.

Debt and equity are sources of finance that a business uses to invest in assets to generate economic benefits in the future. This is known as capital. However, not all the capital has been invested or used to purchase operating assets. Some of that capital is sitting idle i.e. not used as part of the operations of the business. Cash balance is a common example of idle capital.

Below is a simplified balance sheet, clearly showing the invested capital.

Another way of approaching the invested capital is to look at the number of capital investors have given to the business. We will end with the same answer, so an example is the best way to illustrate this:

EBIT*(1-Tax) represents the net operating profit after tax represents the after-tax (NOPAT), but before financing cost-income generated by the investments made in the operations. NOPAT is therefore the return generated by invested capital. We can better understand why we use this figure by looking at it within the context of the balance sheet:

Invested capital is before adding cash and subtracting debt, so we must compare it to earnings before any interest lines. However, investors can only extract earnings from a business after-tax, so we compare the invested capital to after-tax EBIT.

Now we can calculate the ROIC:

The business has generated earnings before interest and taxes or EBIT of 150. This earnings figure has been generated through its investments in its net operating assets of 1,209. However, not all the 150 is available to investors as earnings can only be removed from the business after paying tax. We must adjust the EBIT figure for tax expenses:

Then, the 120 earnings are available to both debt and equity holders and are divided by the capital they provide:

This tells us that for every 100 invested in the company’s operations, the investors should expect a return of 9.9.

We have also calculated the Return on Equity by taking the net income divided by shareholders’ equity on the balance sheet. We use the balance sheet number as that is the capital given to the business.

The Return On Invested Capital, often shortened to ROIC, is useful to make asset allocation decisions. Assuming different investment opportunities are the same risk, the corporation should always invest in the one which gives the highest ROIC.

Solve the Following Question on ROIC 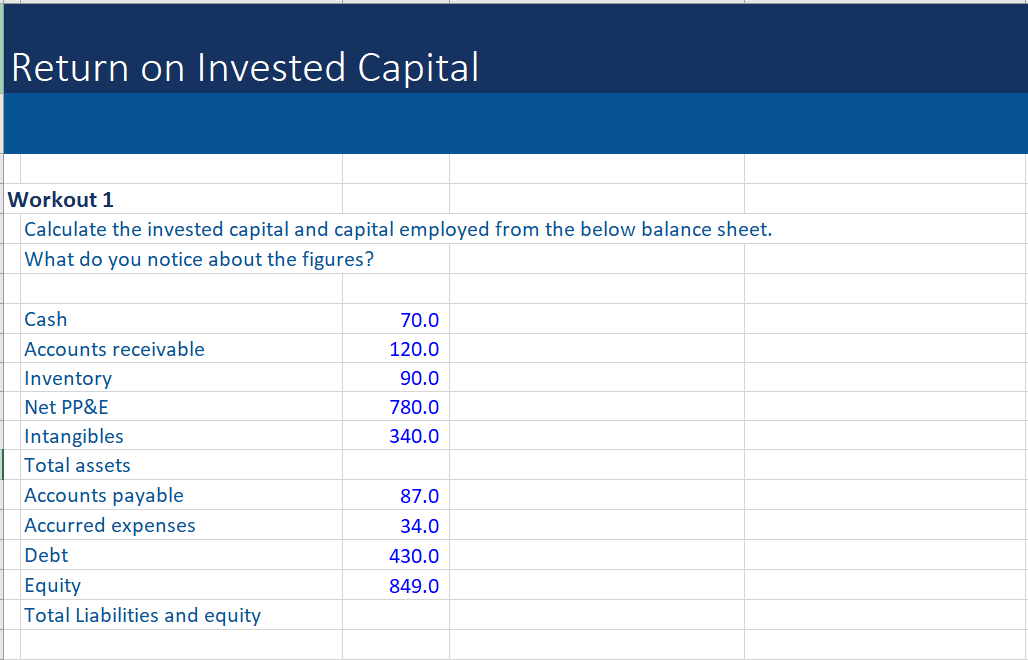