Policymakers, firms, and financial markets all want to know where an economy will likely head in the future. It can be critically important to gauge the current state of the economy and spot indicators of peaks and troughs (turning points) in the business cycle. Further insights can be gained from seeing how it has performed in the past. To assess this, economists rely on three sets of business cycle indicators: leading, lagging, and coincident indicators.

Leading indicators are used to help predict the future course of an economy – generally short-term is 6-12 months ahead or up to 12-24 months longer term. The turning points of the business cycle are an indicator that tends to move up or move down several months before the economy itself moves. These indicators provide valuable early or advance signals of the likely direction or course of the economy.

Coincident indicators are not so useful for predicting the future course of an economy but do provide valuable insights into the current or prevailing state of an economy.

Lagging indicators track changes in the economy and typically do not change direction until a few quarters after the economy does.

Auto sales are a good example of a leading indicator. Sales of autos are usually reported monthly and can help quantify the consumer sentiment for big ticket items. If auto sales are rising, then we might assume that the consumer is feeling confident about the economy (job security etc) and willing to spend on larger priced items. If we see auto sales dropping, the consumer may have become more cautious about job security and will hold back on purchasing expensive items.

Such leading indicators are closely monitored to gauge the health of the economy. Economists will be keen to quantify how closely correlated the indicators are to moves in the underlying economy (typically measured by GDP growth). Importantly investors and economists will want to know how ‘early’ these observations can be spotted consistently before the underlying economy ‘moves’.

For example, if auto sales reached a high (peak) in September 2020, this may imply a peak in GDP around March 2021 (if allowing for the six month lead). If this indicator troughs or reaches its lowest point in September 2020, this, in turn, would possibly imply a trough in GDP around March 2021 (allowing for the six month lead). It is worth noting that not all indicators are correct all the time and correlations can change.

For a leading indicator to be reliable, the relationship between GDP and it should be statistically significant and stable over time (i.e. it should consistently lead GDP over time and movements in this indicator should not be too erratic or volatile). For example, in the US, money supply, yield curve, and stock prices can be thought of as three leading indicators that have been known for their reliability in predicting turning points of the US economy.

Coincident indicators move or change approximately or roughly at the same time as the economy does (i.e. these indicators rise as aggregate economic activity rises and fall as aggregate economic activity falls). Therefore such indicators indicate whether the economy is currently growing or declining and whether growth is above average or below average. Examples of coincident indicators include industrial production, manufacturing, and trade sales volume, and personal income.

Lagging economic indicators tend to move after changes in the economy have taken place. For example, the unemployment rate, a key lagging economic indicator, tends to rise for a few quarters (around 2-3 quarters) after the economy has started to recover or improve (before falling as economic recovery gains momentum). Statistically speaking, such indicators tend to have a weaker correlation with current GDP than with GDP in subsequent quarters (around 1-4 quarters later).

In the US, indexes of leading, coincident, and lagging indicators are produced by The Conference Board. These are summary statistics for the US economy. Each of these indexes is constructed by averaging their individual components (indicators). The underlying objective of averaging is to smooth out a significant part of the volatility of each individual component.

Workout – which are Leading, Coincident, and Lagging Economic Indicators?

From the list below, identify whether each of these indicators stated below is a leading, coincident or lagging indicator. This data is summary statistics for the US economy. 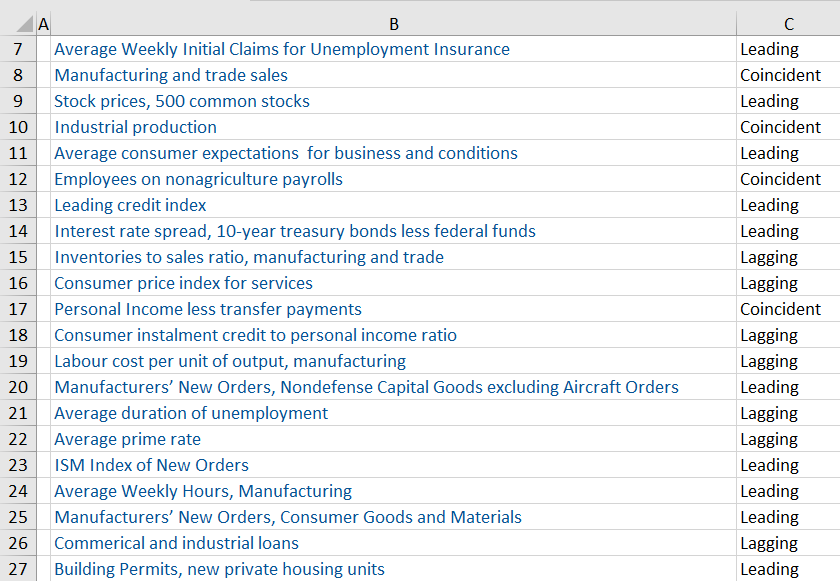