What is “Divestiture Modeling”?

A divestiture is the sale of a segment, division, or asset of a company to another company. This term is most commonly used in the context of selling a non-core business unit (or a non-core part of the business) and it is the opposite of an acquisition. The process of divestiture modeling, a form of financial modeling, involves the building of a pro forma model that shows the impact on the valuation of the divestiture. It shows the accretion/dilution of key per-share metrics. An active divestiture program is increasingly critical for businesses keen to unlock value and enhance shareholder returns.

Broadly speaking, there are four types of divestitures for the purposes of modeling: a cash sale, a carve-out IPO (minority stake), a spin-off (new entity is created – shareholders get shares of both the parent and subsidiary), and a split-off (shareholders exchange parent shares for subsidiary shares). We will look at each of these in more detail.

There are several types of divestiture, and the modeling process can vary according to the type of sale. The accounting treatments will differ for divestiture options i.e. the accounting treatment will differ for various subsidiary options, be they private sale, IPO, or spin-off with or without carving out. It is also possible to assess the post-tax return generated by the use of proceeds vs. ROE (Return on Equity) sold.

If part of a company was to be split out and listed (via an IPO), it would not have a separate subsidiary. Instead, the group would now include a non-controlling interest – to represent a group of new external shareholders.

Divestiture modeling is best illustrated through an example. We will use a technology company (United Technologies) divesting a subsidiary – Sikorsky Aircraft – which has been sold to another company. This example shows the accounting for the initial deconsolidation. We also adjust the United Technologies balance sheet and income statement for the previous year (2014) to show the impact of the sale for comparable purposes.

In the table below, we have some information regarding the sale. It provides the sale price (US,083m), confirms that the sale proceeds are all in cash and that the use of proceeds will be used for a share buyback. We also have some details of the share buy-back program and the capital gains tax implications. 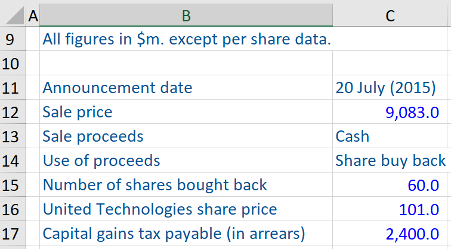 Once we have acquired the details of the subsidiary financials we can start to strip them out of the consolidated balance sheet to show a balance sheet for United Technologies excluding its subsidiary. All the subtotals need to be added up vertically. These calculations have to be set up before we put up all the adjustments. Please note that this process links to ‘adjustment’ columns not directly to the subsidiary financials, as this will be useful for later on. We have come up with our template of United which is ready to exclude the sold subsidiary, Sikorsky.

The next step is to correctly identify which adjustments need to be made to strip out the now-sold subsidiary. In effect, this is the line-by-line process of de-consolidating Sikorsky. For example, in the third column of the balance sheet (Adjustments) we subtract out all the cash (-US$75m) of Sikorsky’s. We need to make the same adjustments all the way down the balance sheet to strip the figures out from the United Group.

The one item where we don’t make adjustments is Equity (refer to the table below). Divestiture modeling does not consolidate equity, therefore, we don’t have to deconsolidate the subsidiary’s equity either.

To conclude, we have successfully deconsolidated Sikorsky Airlines from the group United Technology balance sheet. To check the process is complete let us go to the bottom of the final column. There you should have an unbalance by US$2,723m (which it is) which is consistent with the equity-linked to Sikorsky Airlines.

Learn more about Divestiture Analysis with our online course.