What are Correlation and Covariance?

Correlation and covariance are statistical tools that measure the relationship between two variables, and they play a vital role in the field of finance.  Correlation measures the degree to which two variables move in sync with each other. If they move in the same direction, then the two variables are positively correlated. If they move in opposite directions, they are negatively correlated. The correlation coefficient lies between -1 and +1 and indicates the strength and direction of the relationship between two variables. It is a pure value and not measured in any type of units.

Cov(X,Y) = Covariance between X and Y

If two variables X and Y have expected values E(X) and E(Y), then we can calculate the covariance between the two variables using this formula.

On the other hand, if the correlation coefficient is 1, this indicates that the variables are perfectly correlated and move in lockstep. In this case, if one stock moves up or down, the other stock moves exactly in tandem. Correlation is used to measure how a stock moves in relation to a benchmark index. For example, large-cap mutual funds typically have a very strong positive correlation to the S&P 500, often close to 1. Small-cap stocks are also positively correlated with the S&P 500, although to a lesser degree of around 0.8.

In portfolio management, correlation is the basis upon which diversification is achieved in a portfolio. The objective is to diversify away from the stock-specific risk. This is achieved by choosing investments that have a low correlation with each other.

Below is an example in which the correlation and covariance between stocks A and B have been calculated in two scenarios – an economic recession and expansion. We use the formulas mentioned above to calculate the two values. The results show that the covariance between the two stocks, A and B, is 2.3 and the correlation between the two is positive and strong (0.79). The two stocks tend to move in the same direction.

In looking at a mutual fund, the investor needs to analyze performance based on certain parameters – average return, standard deviation, Beta (which includes covariance in the formula), correlation, and beta correlation. To determine whether the fund is a good investment, it’s necessary to estimate future returns.

Of these parameters, we focus on Beta to gain an insight into the pivotal role that covariance and correlation play in investment-related decisions.

In order to calculate beta, it’s necessary to know the covariance between the return on the stock/fund/portfolio and the return of the overall market, along with the variance of market returns.

The calculation reveals that Stock A is much less volatile than the overall market, as it has a beta of 0.481. This suggests that the stock experiences 52% less volatility than the benchmark market index.

The concept of correlation plays an important role within the realm of finance. It’s used to forecast future trends and manage portfolio risk. For example, a fund manager could reduce portfolio risk by selecting assets that are not strongly correlated with each other. Investors can also use historical correlation data to forecast whether a company’s stock price will rise or fall when interest rates change or when there is a change in commodity prices. Moreover, correlation is also used in pricing complex instruments such as derivatives. It’s also possible to reduce portfolio risk by investing in assets that have a negative covariance.

Solve the Following Question on Correlation and Covariance

Below is a question to test your knowledge, download the Excel exercise sheet attached to find a full explanation of the correct answer. 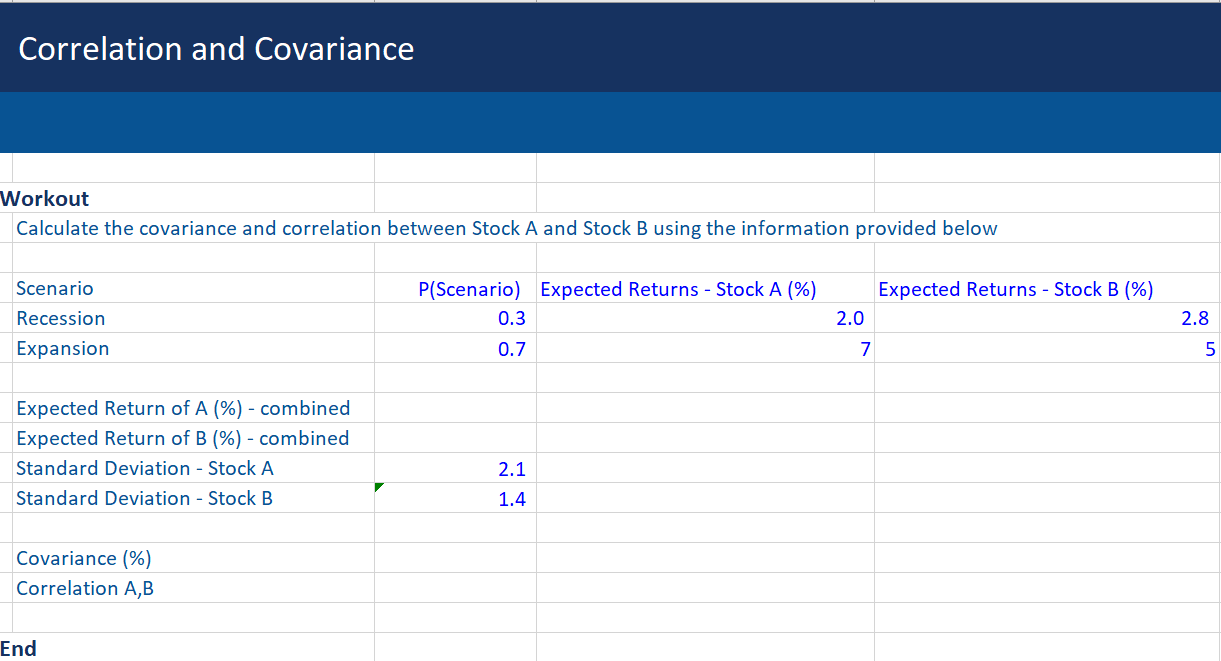