What is “Paid In Kind (PIK) Interest”?

When companies raise debt, lenders expect to be compensated through periodic or scheduled interest payments along with the principal. PIK notes enable a company to defer interest payments (i.e., cash payment of interest) until the bond matures. Basically, Paid In Kind (PIK) interest, a feature of some debt instruments, refers to the interest expense that is not paid in cash but is accrued (or rolled up) onto the balance of the loan. In the following year after issuance of the debt instrument, interest is charged both on the existing loan and the rolled-up interest. This means that no interest is paid during the term of the loan, and at the end of the term the debt (principal) is repaid along with the accrued interest.

Paid In Kind (PIK) Interest – Risk and Variants of PIK

Some instruments may pay part PIK interest. For example, a 10.0% loan with a 50.0% PIK element means that half the interest is paid in cash and half is accrued.

When interest is structured as PIK toggle, the borrower can choose to pay the interest in cash or instead roll up the interest on the loan (by paying an increased coupon in the future).

Given below is information about the PIK debt raised by a company and the steps to forecast the interest expense and the PIK note ending balance.

Given below is the PIK note balance in year 0. 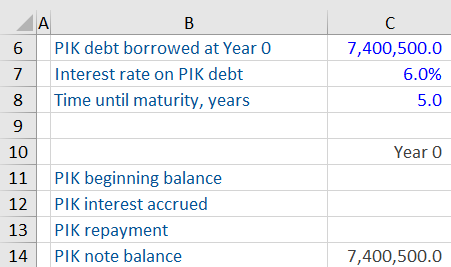 Next, we calculate the PIK interest accrued each year and the PIK note balance at the end of each of the 5 years.

At the end of year 5, the original debt is repaid along with the PIK interest accrued. At this point the PIK note balance is 0.0.

PIK Interest in the Balance Sheet

In the balance sheet, the PIK note is shown as long-term debt on the liabilities side. When less than one year is left for repaying the debt, it is shown as a current liability (i.e. as the current portion of the long-term debt).

Continuing with the previous example, here is how the PIK note will be shown in the company’s balance sheet:

In the balance sheet, the accrued interest reduces the retained earnings and increases long-term debt (as shown above). In year 4 it moves to be a current liability, before being paid off in year 5.

In addition, in the first year, the cash (asset) goes up by the amount of the PIK note. In subsequent years, the accrued interest goes to the income statement, which reduces net income.